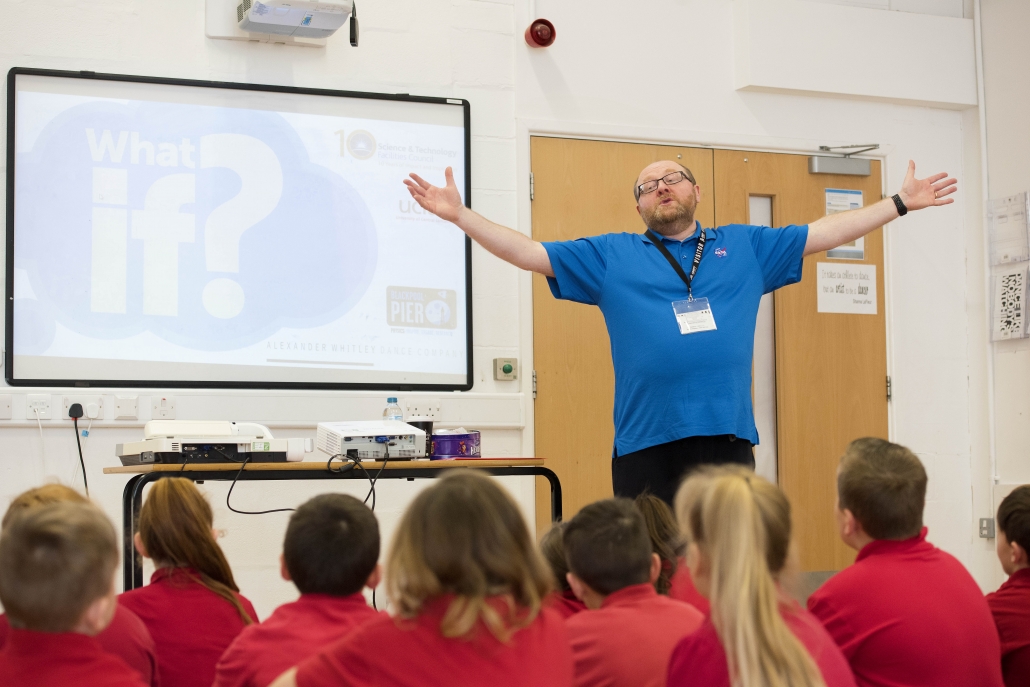 Primary school children from low socio-economic areas are just as interested in science as their more affluent counterparts, according to new research from the University of Central Lancashire (UCLan). However, a lack of knowledge about possible science careers means their aspirations for scientific roles later in life could be lost.

These findings, published in the Journal of Science Communication (JCOM), come from the ongoing four-year Blackpool PIER (Physics: Inspire, Engage, Research) project conducted by Professor Robert Walsh and Dr Cherry Canovan from UCLan. The research is funded by the Science and Technology Facilities Council (STFC) as part of a Fellowship in Public Engagement held by Walsh.

It involves pupils from three primary and two secondary schools in Blackpool, one of the most socio-economically deprived areas of the UK, and aims to improve engagement with science and technology, especially space science, amongst a very low participation group.

The project is following the same cohort of pupils as they progress from Year 6 to Year 9. Initial findings, drawn from surveys, interviews and other assessments with Year 6 pupils at the beginning of the study, found that as a group the children are as interested in science as their peers from more affluent backgrounds.

This study suggests that attempts to increase science participation among these groups should not simply promote the subject as ‘fun’ or ‘interesting’ but could have a greater impact by demonstrating clearly how science can open up possible future career opportunities.

Research Associate Dr Cherry Canovan, lead author on the paper, said: “It is heartening to speak to these young people and find that they are enthusiastic about science, yet we often don’t see this interest translates into an expectation of future job opportunities involving science.

“There are likely a number of factors involved here. The pupils we spoke to know it is useful to study science, but don’t really know why, and have a limited understanding of the breadth of science-related careers. Many just can’t see themselves ‘being scientists’ despite saying they enjoyed the subject, with some fearing it would be incompatible with how they like to be perceived, for example being sporty, ‘girly’, or the class joker.

“In addition, the pupils we interviewed didn’t have science role models to emulate and while many said their parents had an interest in science, the proportion among the PIER cohort who said their parents would expect them to go to university was around ten percent lower than among the same demographic nationally*.”

Professor Walsh and Dr Canovan have used these results to plan a series of engagement activities with the pupils over the following three years to see if they can influence decisions to study science to GCSE level and possibly beyond.

Professor Walsh said: “Much government policy towards boosting science in higher education in particular focuses on an assumed lack of interest and desire in low-socioeconomic groups. However, the enthusiasm is already there and this ‘hidden science identity’ needs to be revealed and translated into real-life prospects for these young people.

“It is concerning that while pupils stated that science was useful, they did not have the understanding to back this up; this suggests that often methods used to disseminate this message could be lacking in practical effectiveness, information that may provide some cause for reflection among the wider science communication community.

“We’re recommending that programmes instead allow young people to explore their science identity more fully and provide innovative ways for them to discover the kinds of jobs that studying science may lead to.”

The PIER project has been conducting four different types of activities each year for the PIER participants, which translates to around 36 hours of science contact for each pupil overall. This includes ‘meet the scientists’ events, trips to UCLan’s Alston Observatory and Young Scientist Centre as well as family science events at school. All pupils will be reassessed at the end of the process to see if their attitudes, understanding and relationship to science has changed.

Dr Canovan is also conducting an ongoing research project into the impact of Covid-related school closures on primary science learning and said the pandemic could exacerbate scientific inequalities.

“We are beginning to see evidence that science learning loss due to lockdown is a much greater problem in traditionally low-participation communities. Teachers felt less able to set science work due to concerns about internet access and asking parents to provide resources for activities. For many of these children, school is their only opportunity to access science; ongoing Covid restrictions could further widen the gap between the science ‘haves’ and ‘have-nots’.”

She added: “Blackpool is just one example of a community where young people are being left behind. It is not just in the interest of the pupils themselves to see working in science as a realistic prospect, but as the government looks to increase jobs in areas such as the space industry, cybersecurity and clean energy, then the UK needs a much larger pool to draw this future workforce from.”

The paper, A space to study: expectations and aspirations toward science among a low-participation cohort, is available to download on the JCOM website.

Tweets by @EducatorMagUK
STEVE CLARKE AND DAVID MARSHALL GIVE TOP MARKS TO SCHOOLS PROJECT THAT TAKES... 50% of schools would like more support with remote learning
Scroll to top
This website uses cookies to improve your experience. We'll assume you're ok with this, but you can opt-out if you wish.Accept Read More
Privacy & Cookies Policy