As part of an extensive sustainability programme and after suffering several legacy boiler failures, Royal Grammar School Worcester required a reliable and efficient heating solution across its seven plant rooms.

The heritage of Royal Grammar School Worcester means there are certain challenges when incorporating energy efficient technologies within buildings dating back as far as the 19th century. Having opted to enhance its sustainability credentials and replace a poor performing heating system, the school needed to tackle the integration of new boilers across its estate while using its pre-existing pipework. As an added complication, the replacement of the aged heating boilers and systems needed to be completed over the six-week long summer holidays before term time commenced.
After two initial boiler breakdowns at the end of 2014, where the school had to rely on electric heaters during term time, Bosch Commercial and Industrial were approached to carry out a review of the estate and identify other areas of risk. Many of the existing boilers were legacy boilers over 15 years old so would be costly to repair, if they could be restored at all, and were not in line with the school’s ambition to improve energy efficiency and future proof its estate. Overall, it was decided that a total of 21 high-efficiency condensing boilers would be installed across seven critical locations, with each plant room presenting its own unique challenges.

Mixing the old with the new

Bosch Commercial and Industrial recommended its GB162 boiler as its compact dimensions made it especially suitable for the plant rooms, many of which were difficult to access and were restricted in space. Also, the range of outputs available and the option to cascade meant that the school could cater for different heat demands across different areas of the site. With net efficiencies of up to 110% and NOx emissions of less than 40mg/kWh, the GB162 range provides clean, low-carbon heating and hot water.

Energy efficiency is a top priority for the school and the GB162’s ability to automatically modulate its output down to less than 20 per cent in order to precisely match the demand for heat, will result in reduced fuel consumption and improved overall seasonal efficiency.

One of the key challenges of the project was the old and corroded pipework system, which had the potential to affect the operation and efficiency of any new heating appliances. To overcome this, a plate heat exchanger was installed to provide two elements of protection and to separate the old and new systems. 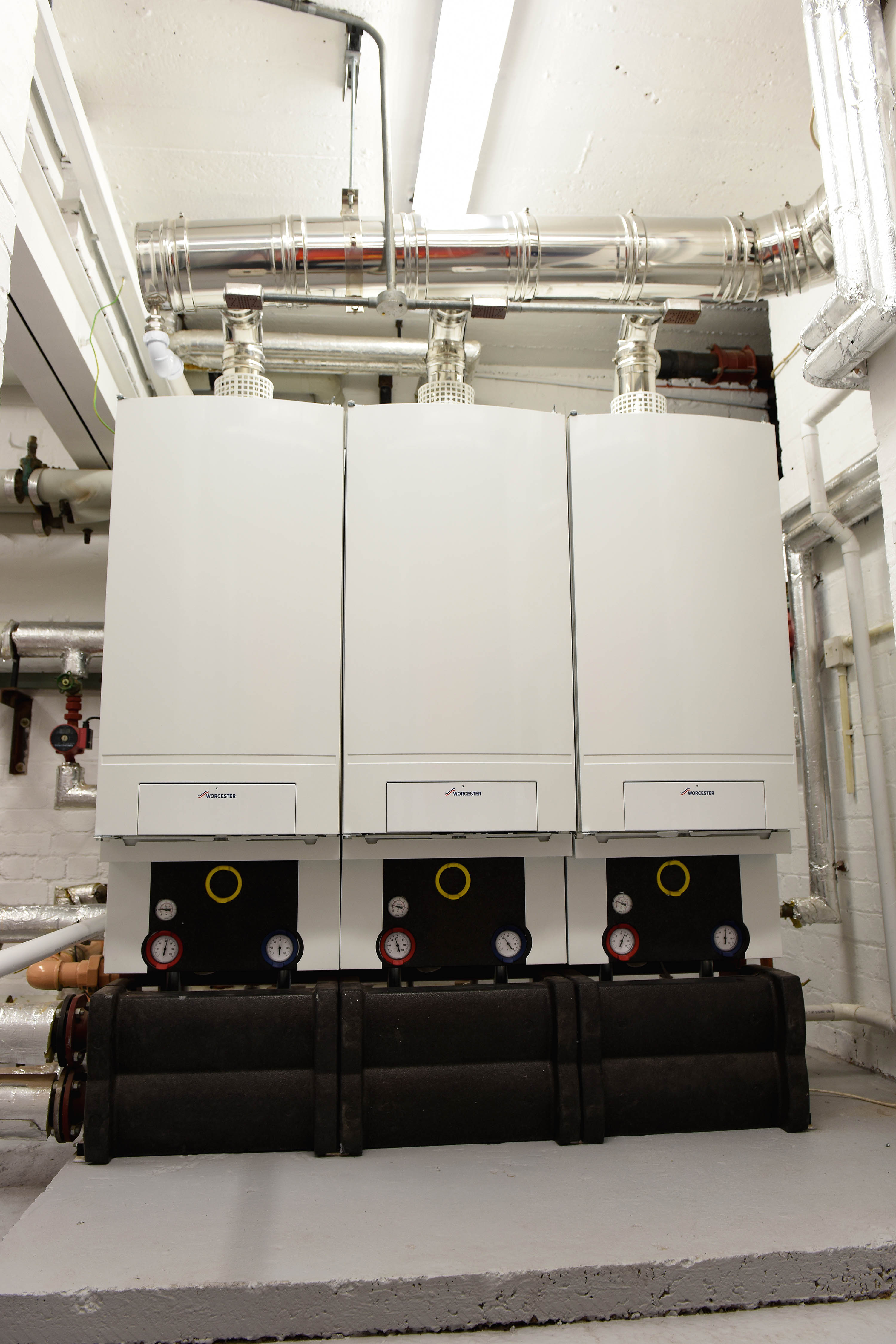 Improving sustainability
Work commenced on site on 13th July 2015 and was concluded successfully on 21st August 2015. Due to the boilers being fitted in the summer holidays, the school has already experienced its first winter with the new system in place and has seen improved control. The complex nature of the ongoing sustainability project means that the situation remains under review. With plans to replace other legacy equipment on site, upgrade to solar technology, LED lighting and secondary glazing, and to improve insulation, the school is expecting significant energy savings in the long term.
Stephen Bailey, Managing Director at Alphabet Industries Limited and Client Engineer on behalf of Royal Grammar School Worcester, said: “Bosch were the ideal fit, offering excellent support and a total solution with a flexible product. The team were extremely accommodating and their knowledge on how to approach a problematic situation really shone through. In January we had a situation where two more ageing boilers failed and we called upon Bosch again to deliver replacements into a purpose-built plant room. Given the recent cold temperatures, it was great that Bosch turned things around so quickly.”
Ian Roberts, Bursar at RGS Worcester, added: “After investing in new boiler installations across the site, we have seen a noticeable improvement in how effectively our maintenance team operates. The consistency of having just the one type of boiler to maintain is saving time and helping us to build a specialist workforce.”
Lance Blackburn, Commercial Technical Manager for Midlands and North Wales, at Bosch Commercial and Industrial, commented: “It is great that we have built such a strong relationship with RGS Worcester and that we were the first company to spring to mind when there were problems to solve. The GB162 was perfectly suited to the site due to its flexibility and energy efficient characteristics, and with the school’s commitment to investing time and money to make changes in line with its sustainability programme, it is set to maximise on the benefits of the new installations.”
For a more in-depth look at the considerations that need to be made when investing in a new heating system, ‘Out of sight, out of mind? A report on the heating and hot water challenge in UK schools’ is available to download from: https://www.the-educator.org/school-heating-report/ 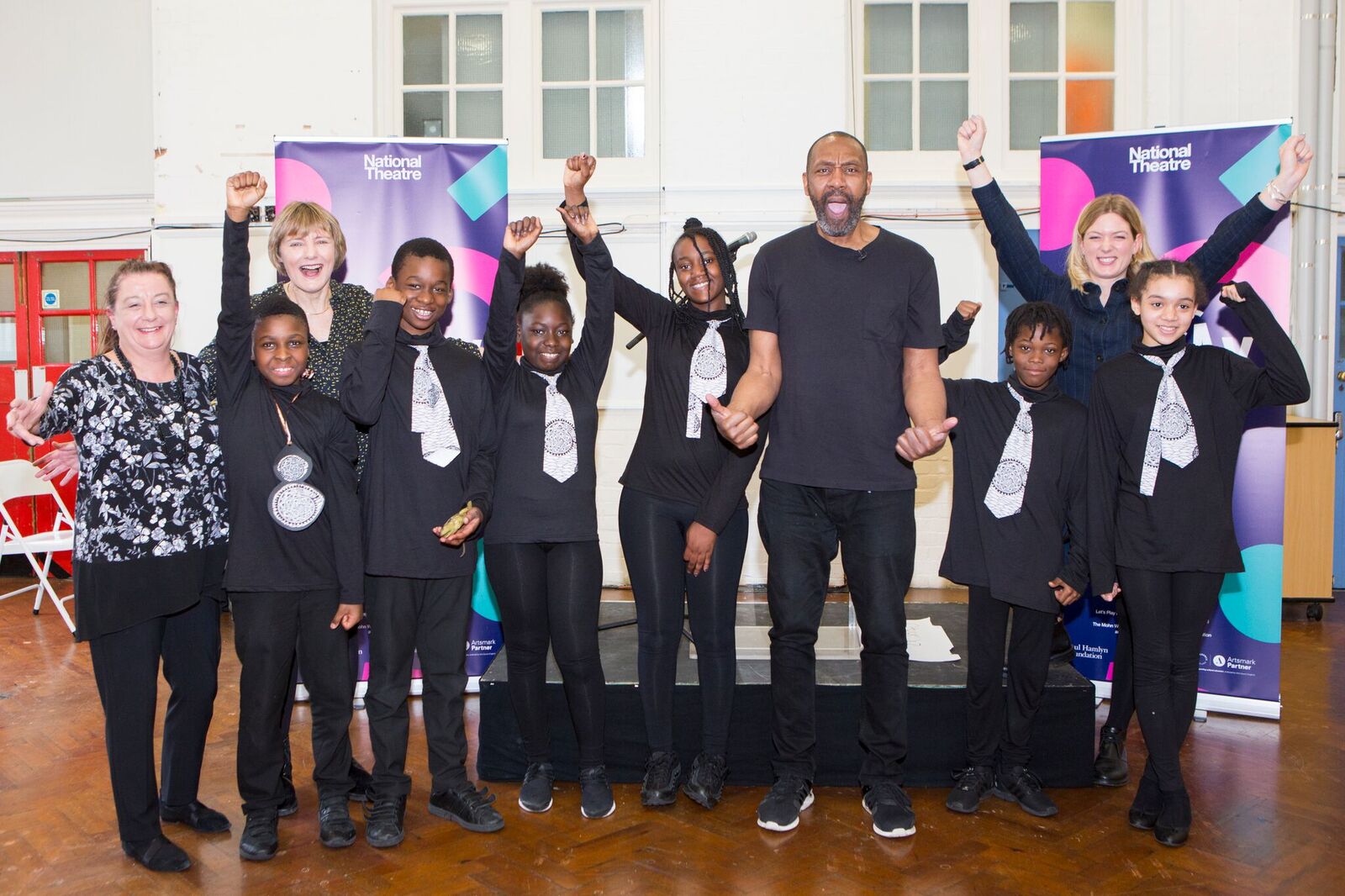 Sir Lenny Henry today launches Let’s Play, a major new initiative supporting the development of drama and theatre in primary schools across the country.
Let’s Play commissions exciting new plays with songs and music for children aged 4 to 11 to perform. The programme also provides teachers with high quality training and professional development. This is designed to inspire creative learning across the curriculum and to enable the school to involve children in all aspects of planning and creating a theatre production – from performing to designing costumes to operating sound. The National Theatre is aiming to recruit at least 700 schools across the UK to take part in Let’s Play over the next 3 years.
Sir Lenny Henry, a member of the National Theatre’s board of trustees spoke at the launch, “The National Theatre was founded with a mission to educate as well as entertain and many of us working in the arts can remember an experience at school – a theatre visit, an inspiring teacher, meeting a professional artist – as the ignition to their career or enduring passion for the art form. Let’s Play is the perfect scheme to engage primary school children in the artistic process, it’s an essential part of a young person’s creative and artistic education.”
The Commons Select Committee on Education has reported that SATS (standardised assessment tests) and the pressure on schools to compete in national league tables has led to a narrowing of the curriculum with a focus on English and maths at the expense of the arts. All children are entitled to a broad and balanced curriculum with a rich arts and cultural education.
Speaking at the launch Lisa Burger, NT Executive Director said, ‘At the National Theatre we believe that all young people wherever they are in the UK should have the chance to see, make and explore theatre as a core part of their education. Let’s Play is the National Theatre’s commitment to supporting schools across the country and to developing teachers’ skills to ensure that the arts, including drama and theatre, remain a vital part of school life. Theatre has the power to transforms lives. It connects and empowers children and young people, develops their skills, confidence and curiosity and vitally, drives imagination and empathy.’
Developed by professional theatre artists alongside teachers and senior leaders from primary schools across the country, Let’s Play is an ambitious creative learning programme designed to transform creativity and theatre-making in schools. Using a programme of Continued Professional Development and Learning for teachers, specially commissioned plays for children at Key Stage 1 and 2 to perform, and extensive learning resources, Let’s Play inspires learning across the curriculum.
Hill Mead Primary School took part in the pilot of Let’s Play last year. Becky Lawrence, Deputy Head Teacher, spoke at the launch about what the teachers and children had learnt from the programme, “The Let’s Play programme has had a huge impact on the children – it has developed their speaking and listening skills, supported their reading and writing skills and their confidence and empathy grew rapidly. The training was exceptional and prepared teachers to deliver the programme with confidence and enthusiasm, and with an improved understanding of teaching through drama.”
The Paul Hamlyn Foundation is supporting the programme across the UK. Catherine Sutton, Senior Grants Manager from PHF commented “School productions are important occasions in the primary school calendar and a valuable vehicle for pupils’ learning. Let’s Play will enable schools to extend and deepen the opportunities for creative teaching and learning offered by school productions, to build teachers’ knowledge and confidence and to develop children’s skills and enjoyment of drama and theatre. We’re delighted to be supporting this new programme.”
The National Theatre’s partner for learning is Bank of America Merrill Lynch. Andrea Sullivan, international executive, global Environmental, Social and Governance at BofAML, said: “The education programmes which we are supporting are crucial to ensuring that creativity and innovation are fostered in our children from a young age. The bank’s support reflects our commitment to partnering with arts institutions to help promote cultural understanding and enrich our local communities.”
Let’s Play is based on an original idea by Katie Mitchell.
For more information and to sign up your school visit: nationaltheatre.org.uk/letsplay
Let’s Play is supported by Paul Hamlyn Foundation and Charlotte and Simon Warshaw.
The Mohn Westlake Foundation supports nationwide Learning programmes for young people.