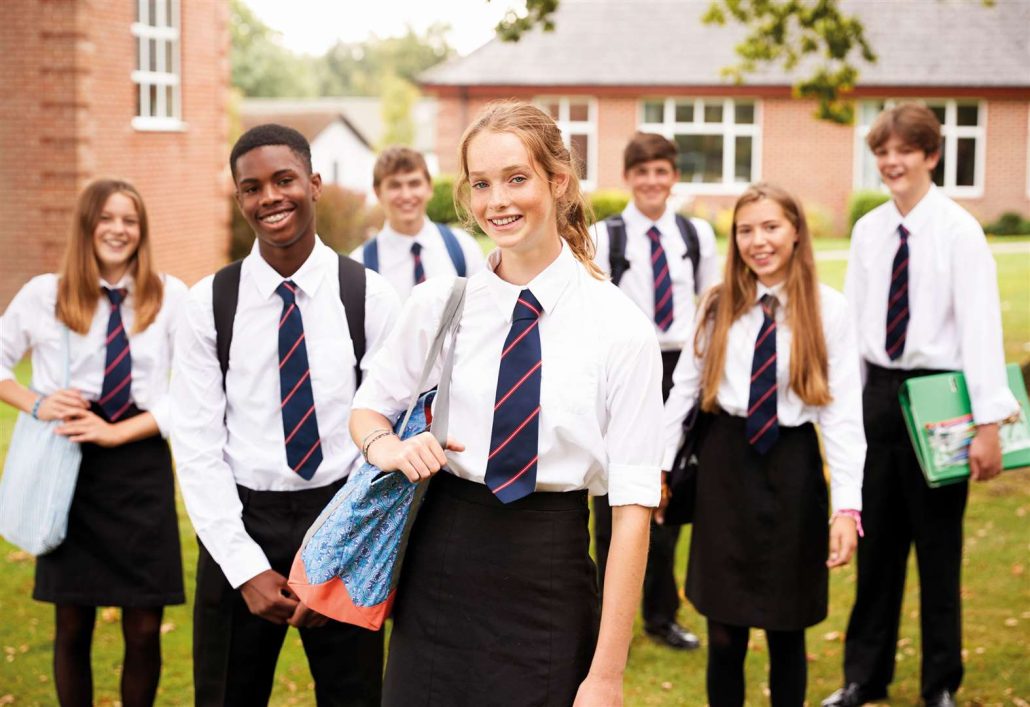 School uniform is a staple of the British education system. A variety of brazen blazer colours, tartan skirts, shirts, and striped ties certainly live up to the organisational structure of schools that are represented in movies such as Harry Potter and St Trinian’s.

There’s no formal history of the school uniform; however, it is believed to have originated in 1552 at the Christ’s Hospital School in England. But after 469 years, is it time to finally say goodbye to charcoal trousers and pale blue polos? Should kids be allowed to pick their clothes and show off their personalities?

Here, we reignite the great school uniform debate. We’ll explore why school uniform needs a serious alternative and let you decide whether the school tie should be loosened once and for all.

Uniformity – it’s in the name

The British school uniform is about more than just tradition. Schools maintain a tight dress code for several reasons. Firstly, uniforms prescribe a sense of belonging to an institution, and those who wear a uniform can take pride in an organisation and show respect to their education.

A strict uniform can also convey control and order at a school – a safety net to reduce harassment and bullying. Designer clothing could be seen an ideal which many students could not meet.

Another argument suggests that school uniform is preparing children for the world of work, fashioning them into model citizens that are ready to hit the ground running. But does a monopoly of school uniforms represent real workplaces? In a survey on work attire, only 18 per cent of people said that their company required them to wear a uniform. Meanwhile, 34 per cent could wear casual and 42 per cent could wear smart-casual clothing. The small remainder wore business formal.

It’s clear that casual wear is the prominent choice of attire for many businesses, so why should schools be excluded from doing the same?

The cost of clothing

While smart looking, school uniforms can be heavy on the pockets. According to a government research briefing, compulsory uniforms and sportswear cost an average of £101.19 per pupil. It is suggested that this costs on average £36.24 per pupil per year, as not all items need to be replaced annually. Therefore, if we considered 14 years of education, uniform can cost families £507.36 per pupil. For families on the breadline or with multiple children, is uniform an unnecessary cost that could be avoided?

If families were able to put that money towards casual attire, clothing that is adaptable for inside and outside the classroom, the savings could be in their hundreds. Furthermore, investment clothing that lasts years can be used generationally and beyond school.

Kids today have had a taste of school without uniform – aside from the odd own-clothes day. The pandemic shifted not only the learning experience outside the classroom, but it also shifted uniform back into the wardrobe. Kids were able to sit through their virtual lessons in clothes they picked themselves.

While being in a classroom has clear benefits for most children, the casual attire of school-from-home did show a side to education we don’t often see: comfort.

Education today is centred around the student experience and what’s best for their learning. That’s why you’ll now see a variety of methods of instruction in the classroom. These include visualisation, cooperative work, and inquiry-based interaction. But uniform, in this sense, is a limiting factor. If children are not comfortable in their learning environment, how can we expect them to learn?

To be truly comfortable in education settings, shouldn’t we allow kids to wear what makes them comfortable — whether that be girls leggings, boys shorts, or a snug hoodie?

Since schools take part in the formative years of a young person’s life, we should be encouraging them to make bold choices and to express themselves. What better way to do that than through clothes?

The rise of social media platform TikTok has put a spotlight on different cultures around the world – perspectives that kids in Britain don’t regularly see. This includes children in the likes of America and Canada, where school uniform is rarely used. Videos under the hashtag “SchoolFit” have racked up close to 80 million views, with stylish individuals showing what they’re wearing to school that day.

Allowing students to choose what they wear is another responsibility that encourages organisational skills. And it doesn’t mean that the clothing will be disrespectful, encouraging clothing that is positive for a working environment may be better practice for future work than prescribing a uniform where no prior thought is required by the student.

As children return to the classroom on a full-time basis, after having a taste of alternative learning, now may be the time to try an alternative to school uniform. No one knows what the ideal learning environment looks like, so experimenting with clothes could be key to unlocking comfortable education where students thrive.

Tweets by @EducatorMagUK
NEW REPORT: lack of skills holds back digital learning, affecting both students... TWO THIRDS OF PARENTS SAY SCHOOLS NOT DOING ENOUGH TO PREPARE YOUNG PEOPLE FOR...
This website uses cookies to improve your experience. We'll assume you're ok with this, but you can opt-out if you wish.Accept Read More
Privacy & Cookies Policy