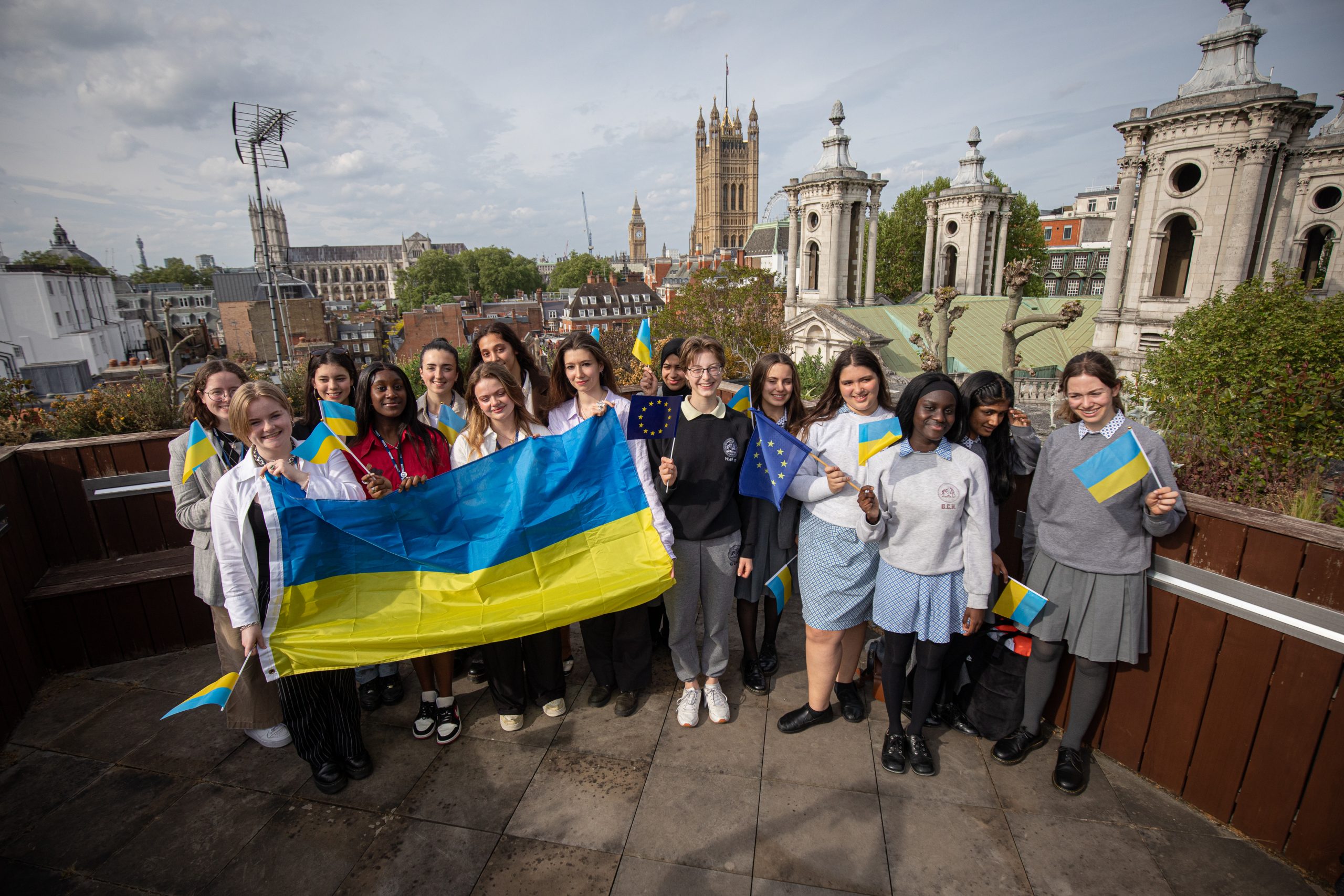 Over 75 students from local schools were joined by people from the Together.eu community to mark Europe Day in London yesterday (Monday 9 May 2022).

The young people were joined by representatives from the European Parliament, the EU Delegation in the UK, diplomats from all over Europe and beyond, friends and neighbours, as all came together to celebrate the European Year of the Youth with a special emphasis on showing solidarity with people in Ukraine.

Europe Day has been marked every year since 1964 to promote peace and unity in Europe. In 2022, the focus on youth was celebrated in the UK with a host of local schools being invited to London’s famed Europe House for a chance to experience the festivities in person, including a preview of the Gardens and Landscapes exhibition by young French artist Alexandre-Benjamin Navet, as well as the opportunity to meet the EU’s ambassador to the UK, João Vale de Almeida and Susanne Oberhauser, Head of the European Parliament’s Liaison Office in the UK, together with her whole team.

Further events took place across Europe, and in the UK a concert at St. John’s Smith Square included a performance by soloists of the Chamber Orchestra of Europe. Alongside standout pieces such as ‘Ode to Joy’ and a soloist performance of Olivier Messiaen’s “Abîme des oiseaux” from Quatuor pour la fin du temps, the orchestra also played the Ukrainian national anthem, highlighting solidarity with the people of. Susanne Oberhauser said: “Europe Day brings into stark focus the “raison d’être” of the European Union: UNITED IN PEACE. And as our President Roberta Metsola put it: Today we celebrate our values, today we stand with Ukraine.”

One of the young people taking part, secondary school student Clemmie Aargaard from London, gave a powerful speech, which really was the cornerstone of the European Year of Youth and Europe Day celebrations. To conclude her very moving and personal account of what it means to her to be European, she said: “When we think of ourselves as Europeans, or as citizens of a wider world, we are motivated to live alongside each other. Celebrating our differences as well as the many ties that bind us.”

The European Union Ambassador to the UK João Vale de Almeida said: “Europe is about bringing different people, languages and cultures together, to reach common goals, and based on shared values. United in diversity, as our motto says. It has not always been an easy job, nonetheless for the last 72 years we did it, we keep on doing it and we hope younger generations will continue carrying the torch for 72 more years at least. We are proud to see so many countries wanting to join us.”

The European Parliament Liaison Office is encouraging all young people throughout the UK who would like to take action on issues they care about such as global public health, the planet, security or human rights. Young people can visit the Together.eu website and connect with others who share their enthusiasm for joint action for a better future.

Tweets by @EducatorMagUK
Leicester School Marks Mental Health Awareness Week “Whilst some providers have been counted in, nobody has been counted out”:...
This website uses cookies to improve your experience. We'll assume you're ok with this, but you can opt-out if you wish.Accept Read More
Privacy & Cookies Policy