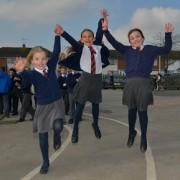 As the London Marathon gets ready to celebrate its millionth finisher, UK charity Kids Run Free invites schools to get their pupils active and healthy with Kids’ Marathon.
UK primary schools now have the opportunity to join the next phase of Kids’ Marathon, the innovative programme that has been praised by the 40 schools currently participating as a sustainable, affordable and achievable sports programme.
Kids’ Marathon inspires children to be active on a regular basis and Kids Run Free has secured funding to offer the initiative to more schools for the 2016-2017 academic year. The charity created the programme in 2013 to tackle the increasing issue of inactivity facing schools and families.
The children are challenged to run a marathon but this is not as daunting as it sounds. Children can run as much or as little as they want. The main objective is to motivate children to be more active whatever the distance. Apart from the obvious impact on children’s physical health, this programme also has a positive impact on concentration levels in the classroom and is also used by schools as an aid to teaching other skills such as leadership, maths, and working with computer programs. The initiative is currently running in 40 schools, reaching more than 9,000 children, with an outstanding 97% participation rate.
“Children have been excited about running and taking part in physical exercise, not just the so called ‘sporty’ kids but a range of different children and abilities.” Pete Hawkins, St. Pauls C of E Primary School, Leamington Spa
“Children have exercised a lot more since the marathon has started. Some children, who don’t usually like to take part in different sports, and who don’t usually enjoy PE, have really taken to the Kids’ Marathon and since it has started it has become one of their main ways of exercise.” Roberto Flint, Hillstone Primary School, Birmingham
For statistical evidence of the positive impact of their Kids’ Marathon programme, Kids Run Free has engaged researchers from the renowned School of Sport, Exercise and Health Sciences at Loughborough University to conduct independent research into the programme. The results will be published in July 2017.
London Marathon Events Ltd, the organisers of the Virgin Money London Marathon and other mass participation events, is financially supporting the second phase of the programme and assisting the charity in launching the initiative in 30 primary schools within London in conjunction with the 2016/17 launch across the rest of the UK.
Why should your school get involved?
The Kids’ Marathon concept fits in within the ethos of 2013’s OFSTED report “Beyond 2012: Outstanding physical education for all”. Furthermore taking part in Kids’ Marathon can contribute to OFSTED requirements on the effective use of PE and sport funding, outlined in OFSTED’s report “Inspecting primary school PE and school sport: new funding January 2014”.
Kids’ Marathon is a package that has been designed specifically for UK schools. When schools take the initiative on board they are getting a fully sustainable package that is implemented by the charity. The schools get an infrastructure and continuous support throughout the year, this includes all equipment and set up of the course, a launch event where teachers and children are trained to manage the programme, posters, stickers and other printable materials, monthly email communication from the charity and invitation to the Festival of Running culmination event where certificates and medals are awarded to the children.
Jason Henderson, Head Teacher at Provost Williams Primary School in Coventry which is running the programme for a third successive year, said: “It’s easy to organise and run, and it’s great to see the children’s enjoyment and the sense of achievement the children have at the end of the year.”
Anna Fairhurst, Head Teacher at Brize Norton Primary School in Oxfordshire that are taking part of the programme for the first time said:
“The support on getting started was excellent. The children still love going out and running round the playground 6 months in, and they love the instant feedback of the record-keeping spreadsheets. It’s great for everyone: the children who have spent hours clocking up extra kilometres at home and those who otherwise would do nothing at all.”
Efforts and achievements are rewarded with certificates and children that complete the marathon distance also receive a Kids’ Marathon medal.
The real cost of the Kids’ Marathon project is £3.70 per child but Kids Run Free has secured funding which means the programme is now available to schools for just £1.00 per child.

Tweets by @EducatorMagUK
Kortext and Microsoft empowers students to take ownership of digital learni... Northern Ballet Challenges Barnsley Schools
This website uses cookies to improve your experience. We'll assume you're ok with this, but you can opt-out if you wish.Accept Read More
Privacy & Cookies Policy