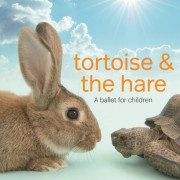 Internationally renowned company Northern Ballet delivered free creative workshops at four Primary Schools in the Barnsley area, ahead of their new ballet for children at The Civic in April.

Earlier this year, The Civic contacted schools throughout Barnsley to offer a free half-day creative workshop based on Northern Ballet’s new production, Tortoise & The Hare. The response was overwhleming and four primary schools were selected by The Civic on a first-come-first-served basis. These were Hope House and Joseph Locke Primary School, and special education schools Greenacre and North Ridge Community.

The workshops aim to give pupils the chance to work with a professional ballet company and learn steps from the production. The sessions included a fun warm up, and explored the story and characters from the show, giving students the chance to try out some of the moves for themselves.

“Keisha from Northern Ballet visited our school to conduct a workshop about their production the Tortoise and the Hare which children will attend in April. The children saw pictures from the production and discussed the plot and themes and enjoyed dancing to music in partners, learning routines and expressing their own creativity. The children really enjoyed working with her”.

“The Greenacre pupils really enjoyed taking part in the Northern ballet workshop. The session was pitched well for our pupils, and the activities were adapted appropriately so that the needs of all our pupils were met. All pupils were fully engaged and on task from beginning to end, which is often quite a challenge for some of our learners!”

The workshops took place at the schools and were are delivered as part of Northern Ballet’s ‘Short Ballets for Small People’ initiative; to introduce children and their families to ballet and the theatre for the first time. The Civic is delighted to once again programme Northern Ballet’s latest production in the Company’s award-winning series of Short Ballets for Small People, following on from the successes of Ugly Duckling, Three Little Pigs and Elves & the Shoemaker.

“We’re always pleased to work with and progamme works by Northern Ballet at The Civic. Their free workshops allow us the invaluable opportunity to inspire children in our community with dance and theatre, directly in their school. And, their shows enable children and their families to enjoy wonderful live performances designed especially for them, in their local theatre.”

Tortoise & the Hare is a re-imagining of Aesop’s much-loved fable of a Tortoise who, tired of being teased for his slowness, challenges a speedy Hare to a race. Lasting approximately 40 minutes, Tortoise & The Hare is at The Civic on Tuesday 5 April at 12pm, 2pm & 4pm. Tickets are £6 full price and £5 concessions.

For more information and to book visit www.barnsleycivic.co.uk or call the Box Office on 01226 327000.

Tweets by @EducatorMagUK
Midlands based charity Kids Run Free empowers children across the UK to run... 70th Annual Co-operative Charity Festival comes to The Civic
This website uses cookies to improve your experience. We'll assume you're ok with this, but you can opt-out if you wish.Accept Read More
Privacy & Cookies Policy