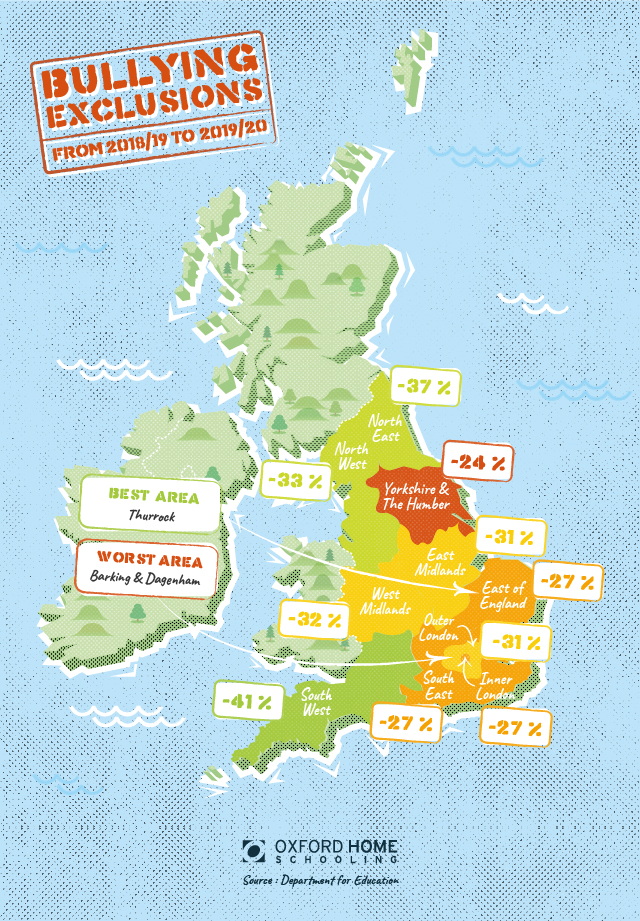 England’s worst areas for school bullying during lockdown have been revealed in new research that has explored the number of exclusions across the country.

Using the latest Department for Education data1, released yesterday, Oxford Home Schooling identified the regions which have experienced the biggest increases and decreases in bullying exclusions between 2018/19 and 2019/20.

Barking and Dagenham is the biggest lockdown bullying hotspot, with the local authority seeing a 200% increase in the number of suspensions and permanent exclusions for this reason compared to the previous school year.

The London borough is followed by North Tyneside, which experienced a 143% increase, and Trafford, where the number of bullying exclusions rose by 138%.

The local authorities that reported the biggest increases in bullying exclusions were:

However, the national picture looks far more positive, largely due to school closures affecting the amount of contact time students had together.

Thurrock, in the East on England, saw the most significant improvement, with a 100% decrease seeing its bullying exclusions drop to zero. Shropshire also experienced a large fall, with a 93% decline.

In fact, every English region saw its figures plummet. Schools in the South West are the best performing in this regard, with the area experiencing 41% fewer bullying exclusions in the last year compared to the previous period.

In contrast, Yorkshire and the Humber saw the smallest decrease, but still reduced its figure by 24%.

The English regions which saw the biggest and smallest decreases in the number of school exclusions for bullying are: 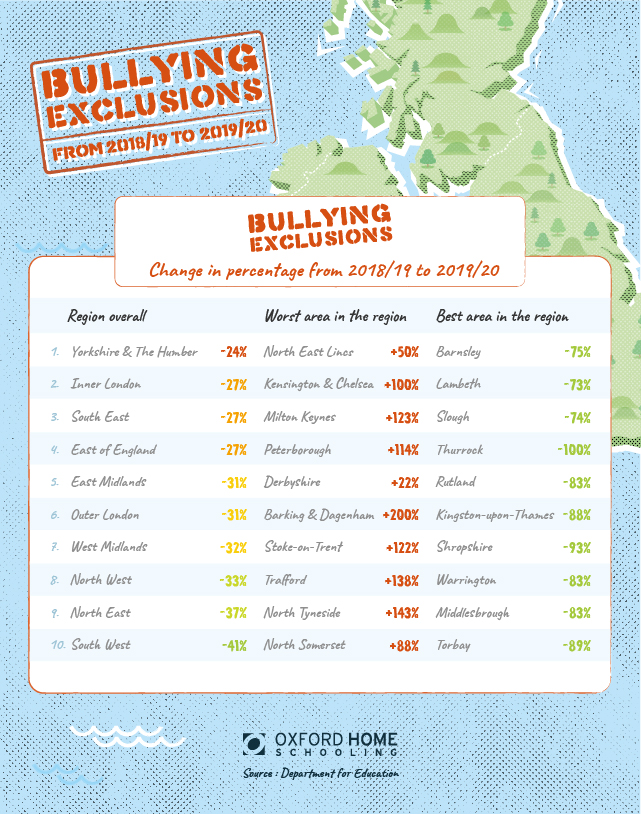 Greg Smith, Head of Operations at Oxford Home Schooling, said: “These new exclusion figures cover the whole of the 2019/20 school year, but with the final term being conducted during lockdown, it’s interesting to see how the data compares to previous totals.

“In many ways, the measures introduced during the pandemic, like reduced class sizes and increased supervision, have helped address the country’s bullying problem, so it will be interesting to see if schools try to adopt some of these permanently, even though restrictions are easing.

“Anecdotally, nearly half of the parents who enrol their children with Oxford Home Schooling list bullying amongst their reasons for doing so. If your child is being bullied at school, then home education is a viable solution.”

To see which local authorities in each region saw the biggest increases and decreases in bullying during lockdown, visit: https://www.oxfordhomeschooling.co.uk/blog/how-lockdowns-have-impacted-school-bullying/

Tweets by @EducatorMagUK
Kinteract is ‘music to the ears’ for Music in Secondary Schools Trust Putting Foundational Maths on an Equal Footing with Reading
This website uses cookies to improve your experience. We'll assume you're ok with this, but you can opt-out if you wish.Accept Read More
Privacy & Cookies Policy