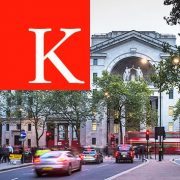 The appointment will see him leading the creation of the King’s Business School which will become the ninth faculty at the university from next month.  As the current Head of the highly regarded School of Management & Business at King’s, Stephen’s leadership has been instrumental in making this vision of transforming the school into reality.

Provost & Senior Vice President of King’s Professor Evelyn Welch said:  ‘We are delighted to announce that Professor Stephen Bach has been appointed as the inaugural Executive Dean. This is testimony both to the significant progress that has been made under Stephen’s leadership over the past 15 months, but also to the clarity of his vision and the level of his ambition for the School as a business school. We are very excited about the future of the new School under his leadership.’

Stephen began his career in NHS management and then undertook his MSc and PhD at the University of Warwick. He has held visiting positions at Cornell University and spent more than a decade at Warwick Business School. His research interests include comparative public service employment relations, the international migration of health professionals and the growth of interim management roles in public services.

He has led several EU-funded research projects on the consequences of austerity and the role of service users in shaping human resource management practice. Professor Bach has acted as an advisor to the International Labour Office, Migration Advisory Committee, Organisation for Economic Co-operation and Development, Scottish Office and the World Health Organisation. He joined King’s in 2000.

King’s Business School will be based at Bush House, Aldwych (the former headquarters of the BBC World Service) and will be a standalone faculty which complements King’s portfolio of law, medicine, policy and social science.

Professor Bach said: ‘I am thrilled to be appointed as the inaugural Executive Dean. The School will combine the agility of a start-up with the heritage of King’s. We will build upon the success of the success of our thriving School of Management and Business and aim to build the premier undergraduate business school in conjunction with specialist masters programmes.

‘The times we are in are creating new challenges which require socially responsible leaders. King’s ability to draw upon our inter-disciplinary strengths, will enable us to create the next generation of leaders properly equipped to meet those challenges facing both business and society.’