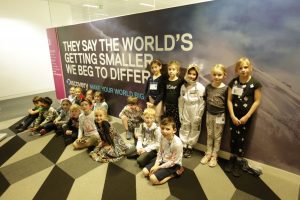 Pupils from a High Wycombe primary school stepped behind the camera at Discovery Channel on Friday, after their classmate scooped first prize in a national competition.

Lauren Croucher from Hughenden Primary School was the winner of the Make Your World Bigger competition – part of a Discovery Education and Discovery Channel initiative to keep children learning during the summer holidays.

6-year-old Lauren amazed the judges by creating a website showcasing her summer learning, which included making a dinosaur model, studying ancient civilisations and even designing a space station! Lauren was inspired after using Discovery Education Espresso’s digital learning service at home during the summer break. The award-winning multimedia resources were offered freely to parents during the holidays as part of the Make Your World Bigger campaign.

Accepting her prize on Friday, Lauren and her classmates took an exclusive tour of London’s Discovery HQ – home to shows such as Running Wild with Bear Grylls, Gold Rush, Wheeler Dealers and Marooned with Ed Stafford. Stepping inside the exciting world of broadcasting, the children put their film-making skills to the test by writing, filming and editing their own promotional video. They also enjoyed visiting the Discovery Channel media centre and meeting with real-life programme makers.

“The children had a fantastic day at Discovery HQ and were fascinated by their insight into the world of television. The Make Your World Bigger competition and digital resources really encouraged our pupils to keep learning and trying new things during the school holidays – and we’re delighted and proud that Lauren was chosen as the national winner.”

“The judges were very impressed with Lauren’s entry which was highly creative and showed a real sense of fun. The competition was designed to keep pupils learning and achieving outside of the classroom – and we’re thrilled that so many children used our digital resources to inspire them to Make Their World Bigger this summer.”

With over 23,000 award-winning resources including interactive games, ebooks and short videos, Discovery Education Espresso has something to spark interest in every child. From exploring the limits of outer space to diving to the depths of the Atlantic Ocean, there’s plenty to keep young learners engaged — and to inspire them to continue to discover and learn new things.

Schools interested in a free trial of the Discovery Education Espresso service can request one here.

Tweets by @EducatorMagUK
CENTRAL YMCA RESEARCH REVEALS LASTING IMPACT ON QUALITY OF LIFE CAUSED BY POOR... Synel UK provide innovative solution for parents
This website uses cookies to improve your experience. We'll assume you're ok with this, but you can opt-out if you wish.Accept Read More
Privacy & Cookies Policy