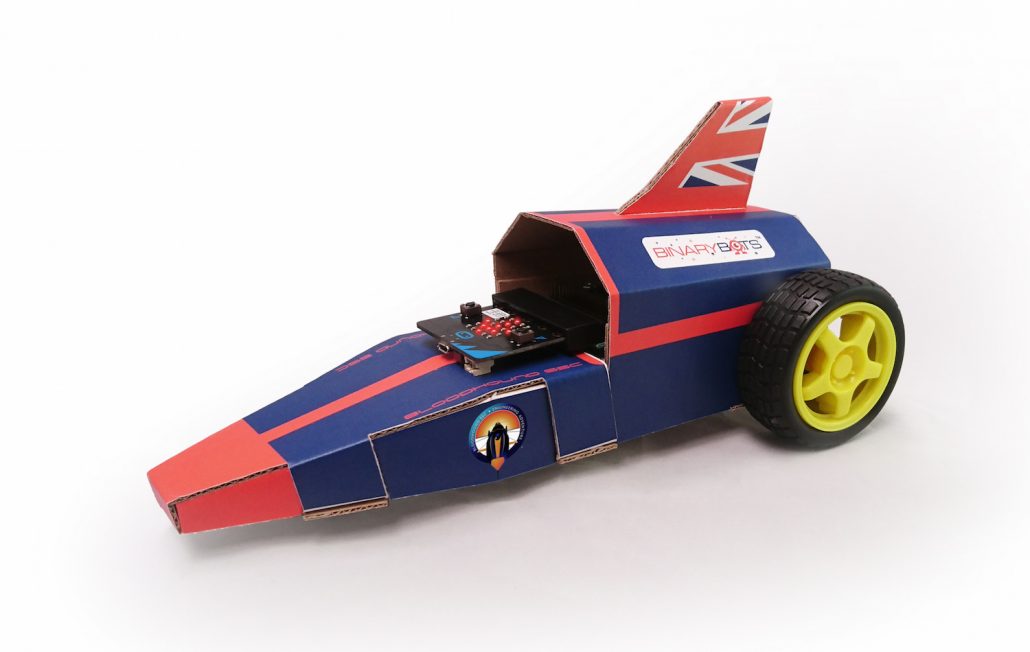 BinaryBots – which produces ‘smart toys’ to teach children to code – has agreed a deal with The BLOODHOUND Project to produce a replica of its SuperSonic Car (SSC) in advance of its land speed record attempt.

The Cardboard2Code JetCar™ Bloodhound kit allows children to build a replica of the fastest car on the planet and use computer coding to move it around. Chris Burgess, CEO of BinaryBots, says the company hopes its latest product will bring staggering possibilities of science, technology, engineering and mathematics (STEM) to life for children.

“The BLOODHOUND Project is the modern equivalent of the Apollo Moon Landings,” said Chris. “Together, we are on a crusade to inspire and engage every child in STEM and robotics. STEM should be fun and what illustrates that better than a really fast car!”

The BLOODHOUND SSC aims to set a new land speed record of 1,000 mph and is the product of British talent and innovation, with sponsors and contributors including Rolls-Royce and the RAF.

Richard Noble, CEO of The BLOODHOUND Project, added: “We’re delighted to announce a partnership with BinaryBots, the innovative robots you can build and code. They’ve even created a limited edition JetCar™ that children as young as 7 can programme using a BBC micro:bit controller. This partnership complements the Project’s aims of inspiring the next generation of scientists and engineers.”

Whilst BLOODHOUND SSC is the most complicated car ever built, children will build their own Bloodhound JetCar™ out of flat pack cardboard. They can decorate it with the official BLOODHOUND stickers or customise it themselves. Using a BBC micro:bit, which is included in the pack, they learn how to use code to programme their car to do all kinds of cool tricks; including obstacle avoidance, using LEDs and even speed runs.

Chris Burgess added: “At its top speed, BLOODHOUND SSC will be faster than a speeding bullet, so it should give Superman a run for his money. And once children have got the hang of coding, they’ll certainly feel like Superpeople as well.”

Tweets by @EducatorMagUK
London Grid for Learning (LGfL) drives UK’s largest rollout of anti-malware... BACK TO SCHOOL GERMS – KEEPING YOUR CHILD HEALTHY
This website uses cookies to improve your experience. We'll assume you're ok with this, but you can opt-out if you wish.Accept Read More
Privacy & Cookies Policy