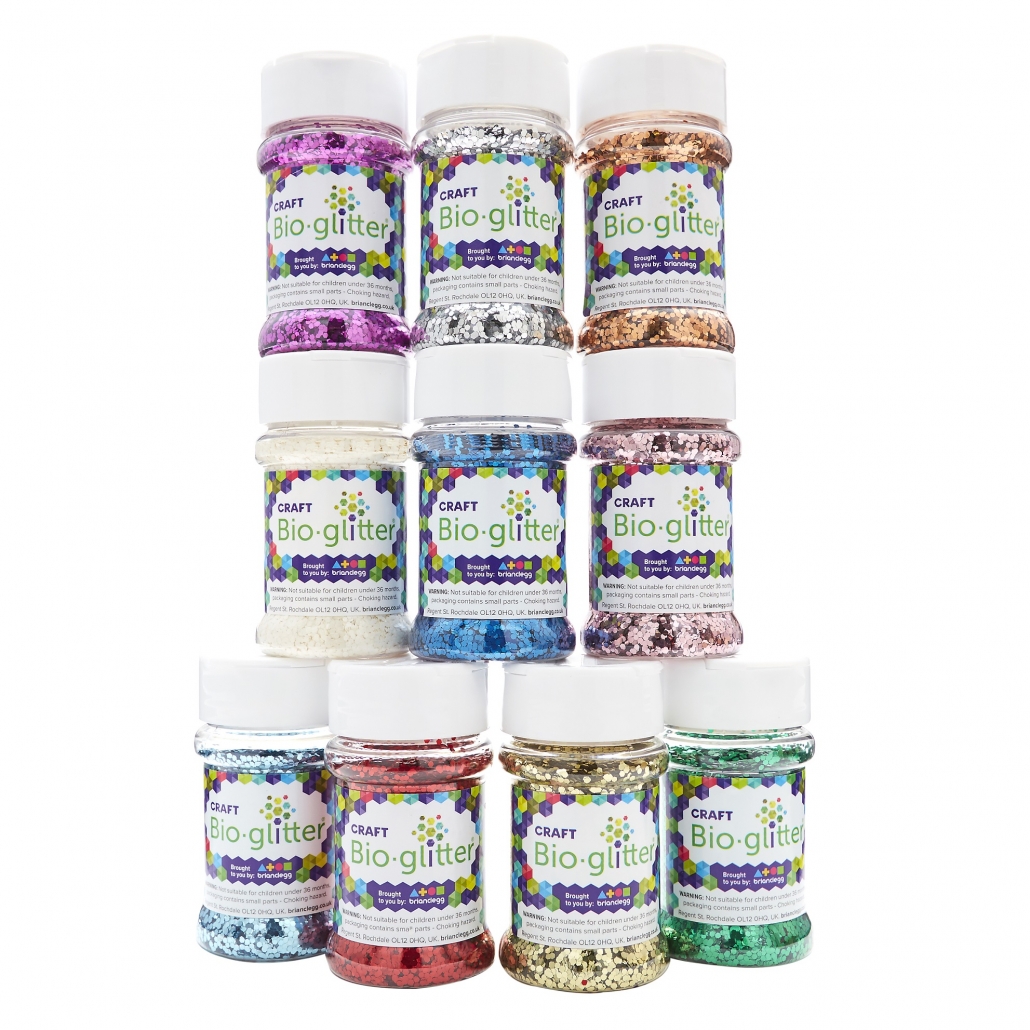 A UK firm has launched a revolutionary product designed to tackle the problem of plastic pollution caused by children’s craft glitter.
Glitter company Ronald Britton, has launched a new eco-friendly glitter which will degrade naturally in the environment and is based on plants rather than plastic.
The new product, Craft Bioglitter®, will be distributed in the UK by children’s art and craft manufacturer Brian Clegg Ltd. The company will be supplying Craft Bioglitter® to both the retail and education markets through approved retailers including The Consortium Education, YPO and TTS.
Bioglitter® has already received international renown, after they first launched a cosmetic version of the product in 2016, which has picked up several industry awards and through independent testing came out as the most eco friendly glitter on the market.
The new Craft Bioglitter® is based on the same eco-friendly technology used in the cosmetic product. The product replaces the use of plastics in the core of glitter with a plant based cellulose material. This special form of cellulose, unique to Bioglitter®, is stable and won’t degrade on the shelf, however once it enters the natural world such as soil or water environments where microorganisms are present the glitter will naturally decompose.
Testing by OWS, an independent testing organisation, has confirmed that Bioglitter® sets a new environmental standard for sparkles, with results showing Bioglitter® degrades in the natural environment, in only four weeks.
Stephen Cotton, commercial director at Ronald Britton Ltd, said: “We’re extremely excited to be working with Brian Clegg who will supply our ground breaking glitter into children’s art markets via retail and educational supply chains.”
“Traditional glitter used in single use applications is, although small in the grand scheme of plastic pollution, a contributor to microplastic pollution. Our new Bioglitter® product, with its fantastic biodegradability credentials, coupled with it already being 92% plastic free, represents a truly eco-friendly glitter.”
He added: “The Ronald Britton team are still determined to drive on with the Bioglitter® journey, not only so it biodegrades in the natural environment, but also to attain the ultimate 100% plastic free goal, so it’s no longer a microplastic.”
Lara Alcock, sales and marketing director, from Brian Clegg, added: “We are delighted to be the chosen partner working with Bioglitter® to supply their craft glitter into the children’s art markets.”
“The product is certainly here to make a difference and we have already been inundated with enquiries from schools and concerned parents wanting to do their bit by looking to opt for more environmentally friendly glitter and get involved in the journey to make a difference. The product also offers other advantages over traditional glitter including the fact that, by its nature, the same amount of glitter goes a lot further than normal plastic children’s glitter, as well as being more sparkly. So Craft Bioglitter® is not only a truly eco-friendly glitter, it has got more shine and less product will also go further.”
For more information on Craft Bioglitter® and the journey to create plastic free biodegradable glitter, visit www.discoverbioglitter.com. To buy Craft Bioglitter® visit www.brianclegg.co.uk