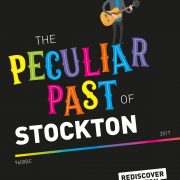 LITTLE KNOWN facts about a Teesside town are being brought into the spotlight, thanks to The Peculiar Past of Stockton tours.

From 24 April until mid-July, youngsters from schools across the town will take part in a walk which will showcase a number of fascinating facts about its history.

While the town is universally known for being part of the Stockton to Darlington railway; the world’s first line to use steam locomotives, there are many other historical points which are less familiar.

These include the fact that The Beatles played the town’s Globe Theatre on the day that President Kennedy was assassinated and that the real inventor of the match was chemist John Walker who had a shop on Stockton High Street.

Walker created a ‘friction match’ back in 1827 but never patented his invention so has never been recognised.

Further back in time, the Bishop of Durham had a great hall built at Stockton in 1183 which eventually became Stockton Castle. This was demolished after the Civil War but is still remembered through street names including Castlegate and Tower Street.

The Peculiar Past of Stockton tour has been put together by Stockton Business Improvement District (BID) working with musician Mike McGrother, frontman of the Wildcats of Kilkenny, who is a huge supporter of his home town and has run a number of initiatives.

“The tour offers a great opportunity for young people to find out more about the area,” said Karen Hindhaugh, manager of Stockton BID.

“There are some really interesting facts about the history of Stockton and its heritage which will be highlighted in these tours,” she said.

“At a time when we are working to help the town have a really prosperous future, it’s great to be able to see where Stockton has come from and to be proud of its legacy.”

Fourteen schools are taking part in the initiative, with the first four – Stockton’s St Cuthbert’s, Glebe School at Norton, Whitehouse Elmtree and The Village, Thornaby – carrying out the tour next week (24 April).

The schools will then return to the town centre for a special event on Saturday 29 April.