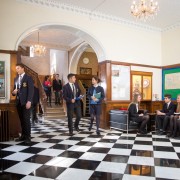 London-based St. John’s Preparatory and Senior School is celebrating its position at the top of Enfield’s G.C.S.E. performance league tables with a 100% pass rate once again.

The first boys and girls of the school sat their G.C.S.E. exams in 1996 and ever since, St. John’s has continued to produce the magical 100% pass rate in all, but three of the subsequent 20 years.

“Naturally, everyone is very pleased,” he said. “We have a wonderful set of teachers who know how to bring out the best in the children and in this way we hope to continue with our success.

“It would not be surprising if few really know of the school, since it never advertises.  It simply relies on its motto “res ipsa loquitur” – let the thing speak for itself.”

The school was set up in 1988 by a father and mother for their own two children, who were not too happy with the schools in their area.  They originally intended and envisaged something small – perhaps about 20 children in all.

Today, 27 years later, approximately 500 boys and girls attend St. John’s which is on two sites set in a total of 30 acres of green belt.

St John’s ranks 46th out of the top 100 performing UK state and independent schools – the list can be viewed here: http://www.telegraph.co.uk/education/leaguetables/12109955/Top-100-secondary-schools-by-GCSE-results-2015.html

Tweets by @EducatorMagUK
Stone Group enters Internet Service Provider market OVER HALF OF UK PARENTS DISAGREE WITH THE GOVERNMENT THAT ALL SCHOOLS SHOULD...
This website uses cookies to improve your experience. We'll assume you're ok with this, but you can opt-out if you wish.Accept Read More
Privacy & Cookies Policy