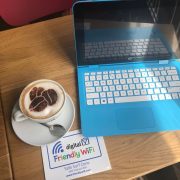 SOARING smartphone use in children and a huge hike in public WiFi hotspots has led to a campaign calling on businesses to let customers know their internet is filtered for inappropriate content.

The ‘It’s Good to Know’ campaign has been launched by Friendly WiFi, the UK Government-initiated certification scheme – the only one of its kind in the world. It supports the Government’s ambition for the UK to become the world’s safest place to go online.

Friendly WiFi was initiated in July 2014 to ensure public WiFi meets minimum filtering standards, particularly in those areas where children are present.

Currently, it is estimated that more than half of the world’s WiFi remains unfiltered for adult content.

Venues displaying the Friendly WiFi symbol have WiFi filters which deny access to pornography and webpages known by the Internet Watch Foundation to host indecent images of children and advertisements or links to such content.

The service has already been adopted by high street giants Tesco, Starbucks and IKEA as well as hundreds of venues across the country.

Now children’s campaigners and online safety organisations are calling specifically on UK businesses who have children and families regularly using their public WiFi to show they are ‘friendly’.

Friendly WiFi director Bev Smith said: “Just looking at the three years we have been in service is to witness a huge rise in young people owning and using smartphones.

“More than 40% of children aged 5-15 own a smartphone. Ten years ago, that number was effectively zero.

“Now is the right time for all businesses which provide public WiFi to prove they take the same care for their customer’s online safety as they do for their physical wellbeing.”

Friendly WiFi was launched following a speech by then Prime Minister David Cameron to the NSPCC and in partnership with the UK Council for Child Internet Safety (UKCCIS).

NSPCC head of child online safety Claire Lilley said: “The Friendly WiFi symbol can help parents feel confident that their children are protected from harmful content when they are accessing the internet in public spaces.

“We’d encourage all business to sign up to the ‘It’s Good to Know’ campaign to give their customers the reassurance that their WiFi is safe for children to use.”

The awareness campaign will focus on the benefits to specific business sectors but also examine attitudes to public WiFi safety.

She said: “Children’s online safety is one of the top concerns facing parents in the digital age and we support anything which can re-enforce the steps they are taking at home to enable young people to explore the internet safely.

“We applaud the work being done by Friendly WiFi and urge businesses to heed the call and back the ‘It’s Good to Know’ campaign by making the symbol visible on their premises.”

Get involved with the campaign by using the hashtag #ItsGoodToKnow.