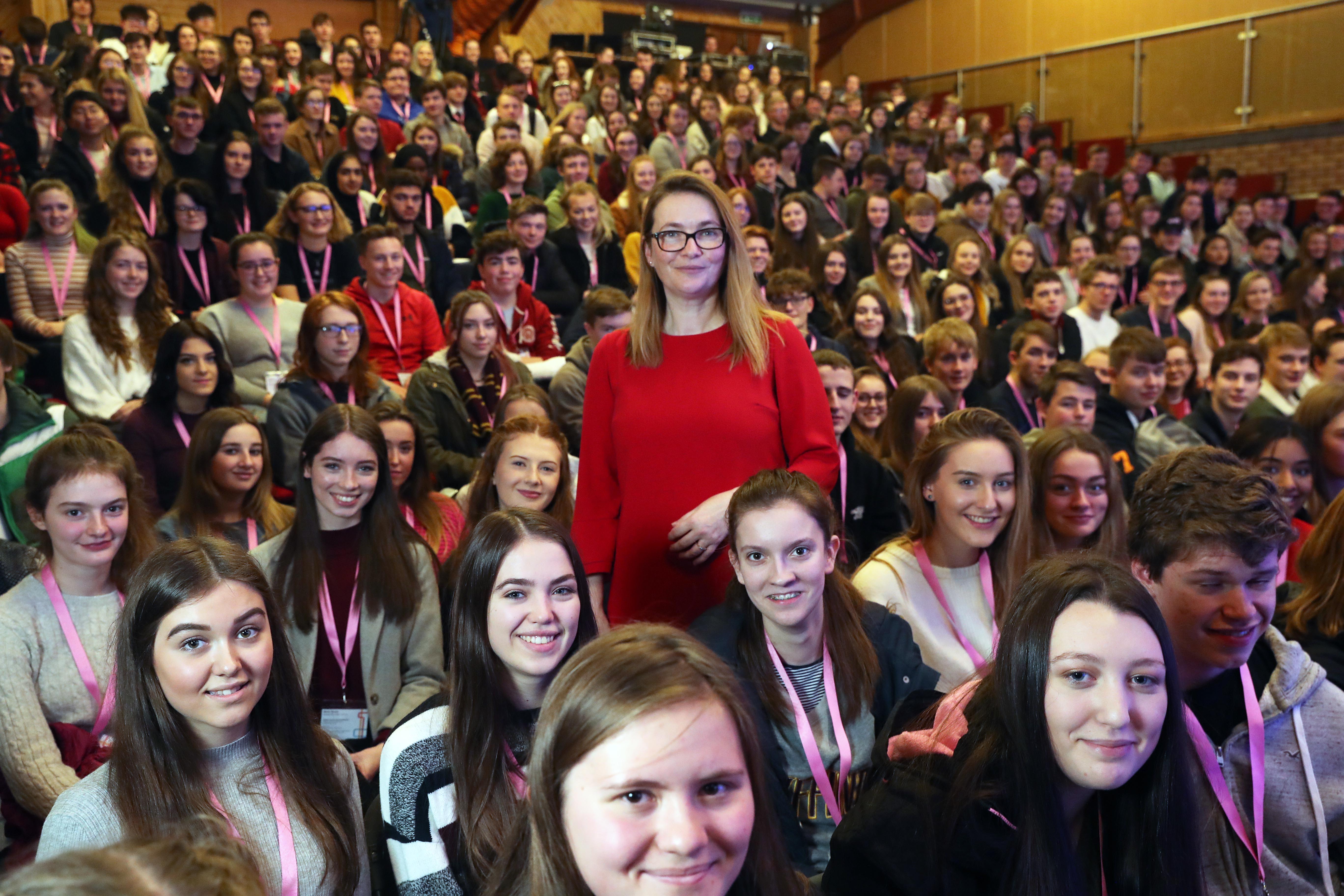 • Cambridge University made the highest number of offers this year (67) to state-educated Welsh students – an offer rate of 31%
• Participants on the Seren-Jesus College Summer School in 2018 attained the highest offer rate to date of 27%, with 11 of 41 applicants being offered places at Oxford
• Applications from Welsh state-educated students to Oxford University have increased by 13% since 2016, with 69 offers extended this year

A Welsh Government programme that supports Wales’ brightest young minds is helping to address the under-representation of Welsh students at leading universities and is making a positive impact, which has been fully supported by Kirsty Williams, Welsh Minister for Education.

Since Seren was fully established by 2016, it has supported students from state sixth forms and colleges across Wales to reach their full academic potential and progress to leading universities.

Seren, as a concept, came from the Welsh Government commissioning a report to consider the reasons for the apparent decline in Welsh admissions to Oxford and Cambridge. Following receipt of the report, the Welsh Government developed Seren – a partnership model with leading universities delivered via a national network of regional hubs across Wales – to deliver a package of ongoing support for students to help them progress to the UK’s top universities.

Each year, Seren invites approximately 2,000 of the brightest and most academically-able students from state sixth forms and colleges to join the network. Seren students benefit from unique opportunities to attend workshops, seminars and higher education outreach events which help to raise aspirations to get into leading universities in Wales, the UK and the US.

Since Seren was piloted in 2015, the number of students from Wales going to Oxbridge has increased and many students have also received offers from Ivy League institutions in the US including Yale, Stanford and Harvard, thanks to extended partnerships Seren has developed.

As the latest round of admissions data from Oxford and Cambridge universities are released today (6 June), a record number of Welsh students have received offers compared to previous years.

Jesus College is known as the Welsh College at Oxford, with more of its current undergraduates from Wales than any other college at the university. Of the 651 applicants who had Jesus as their first choice College this year, there were 61 from Wales (9.3%). Of those, 10 were given offers by Jesus College and 2 received an offer from another College. Of all the Jesus offer holders for 2019 entry, 7.8% will come from Wales. Wales accounts for less than 5% of the UK population. Overall, Oxford has made a record number of 69 offers to Welsh state-educated students and an increase in offer rate of circa 2% since working with Seren.

From September 2019, the Seren programme will be expanded to reach thousands of additional pupils across Wales in Years 8 – 11, with the aim of educating and inspiring students from a younger age to reach their true potential. Seren Foundation will stimulate curiosity beyond the classroom with a view to introduce university and careers ambitions earlier on through workshops, seminars and university outreach.

Minister for Education, Kirsty Williams, has praised the success of Seren and its achievements to date. She said: “Seren is a UK-first programme that gives meaningful advice and support to our most academically gifted students in Wales, enhancing their skills and knowledge so they can progress onto some of the world’s top universities.

“Seren has successfully set out what it meant to do. I am hugely encouraged to see growing numbers of students from Wales apply to Oxford and Cambridge, showing that the programme has boosted confidence and broken down perceived barriers to university, but importantly, that a record number of Welsh students have in return received offers.

“Seren gives students from Wales life-changing opportunities, whether that’s masterclasses with experts, university application workshops or summer schools. The programme has grown hugely since its beginnings and will soon be reaching students in Years 8 to 11 across Wales who will benefit from similar opportunities, all designed to help them reach their academic potential. Furthermore, the Welsh Government has developed further partnerships with universities in the United States through Yale Young Global Scholars and the Harvard Summer School as well as help students from low income backgrounds access additional support from organisations including the Fulbright Commission and the Sutton Trust.

“I’m incredibly proud of Seren’s achievements so far and I’m excited to see its long-term impact as our Seren students continue to inspire future generations of learners from across Wales.”

Harrison Taylor, 18, is a Seren student and is currently studying A-level Maths, Further Maths and ICT at Newport High School. Harrison hopes to secure the grades he needs to get into Oxford University to study Economics and Management this year.

Harrison has broken a record at Newport High School by becoming the first student in the history of the school to receive a conditional offer from Oxbridge, providing he achieves an A* and two As.

Harrison has always set his sights on Oxford University, so when he joined Seren at the end of Year 11 after achieving top grades in his GCSEs he was encouraged to pursue his dream and was reassured that it was not out of reach. Since being part of Seren he has been supported and encouraged to excel in his chosen subjects as well as being provided with opportunities to find out more about life at the UK’s top universities.

Harrison said: “Being invited to join Seren has provided me with the opportunity to attend a number of informative talks about Oxford and Cambridge as well as meet like-minded people. I’ve also been to several sessions on interview techniques and had a mock interview. The sessions really helped me prepare for the process and remain calm and collected throughout. I’ve always dreamed of studying somewhere like Oxford so was completely amazed when I got offered a place. I still can’t believe I’m the first person in the school’s history to receive an offer from Oxford.”

Catrin Williams is a Seren alumna and a first year student at Oxford University, studying Human Sciences at Magdalen College. She said: “It’s great to hear that the number of Welsh students going to Oxford is on the rise. Before joining Seren I hadn’t seriously considered applying to Oxford, but I was encouraged to give it a go and I’m so glad that I did.

“Being part of Seren was a massive help to me. I was provided with all the advice, support and guidance I needed to prepare for the entire admissions process from personal statement to interview. My subject teachers were really encouraging and supportive throughout, but the Seren guidance was a massive help in showing me exactly what to expect and how to increase my chances of success.

“I think that a lot of young people and teachers are intimated by the extensive Oxford admissions process, so it’s incredibly useful to have the knowledge and experience of Seren’s advisors to guide us through each step of the process. Seren is so important in levelling the playing field and giving everyone a fair chance. I hope more and more young Welsh people are encouraged to apply, it’s definitely worth it.”

Dr Samina Khan, Director of Undergraduate Admissions and Outreach at Oxford University, said: “Last year we made just under 100 offers to applicants from Wales and our final acceptance rates have been steady at more than 65 students for the last two previous years.

“We are committed to selecting the best students from across the country and are committed to our bespoke outreach work with Welsh students. The University was instrumental in setting up Seren’s network of regional hubs designed to support Wales’ brightest sixth formers and college students’ ambitions to study to leading universities. This commitment also includes an annual Summer School lead by Jesus College; intended to give Welsh students experience of what life at Oxford is like, and to provide them with the tools and confidence to apply to study here. We welcome Seren’s decision to work with younger school students and believe this will be a valuable addition to the current Seren programme.

“As well as working with Welsh students. Oxford runs a number of targeted activities with the Welsh teaching community such as our annual teachers’ conference, the Oxford and Cambridge Conference and our highly regarded Inspirational Teachers awards, which has presented awards to a number of Welsh teachers.

“Through our collaboration with Seren, Welsh schools and students, we hope to continue to encourage more talented Welsh applicants of all backgrounds that Oxford can be, and is for them.”

Dr Sam Lucy, Director of Admissions for the Cambridge Colleges, said: “The University of Cambridge has supported Seren since its inception and this year made the highest number of offers in recent records to Welsh maintained students: over 30% of Welsh maintained applicants to Cambridge received an offer.
“Two of our Colleges, Churchill and Magdalene, have strong links to Wales and offer support through Seren to all the country’s state secondary schools and colleges, as part of the University’s Area Links Scheme. Our Welsh students are enthusiastic ambassadors for the University, working in a number of outreach programmes and supporting new students once they arrive here. We look forward to welcoming a new contingent of talented students from Wales later this year.”

Tweets by @EducatorMagUK
Portal Educational Training expands into North Wales on the back of 300% business... Schools set for “game-changing” fundraising platform to deliver greater...
This website uses cookies to improve your experience. We'll assume you're ok with this, but you can opt-out if you wish.Accept Read More
Privacy & Cookies Policy