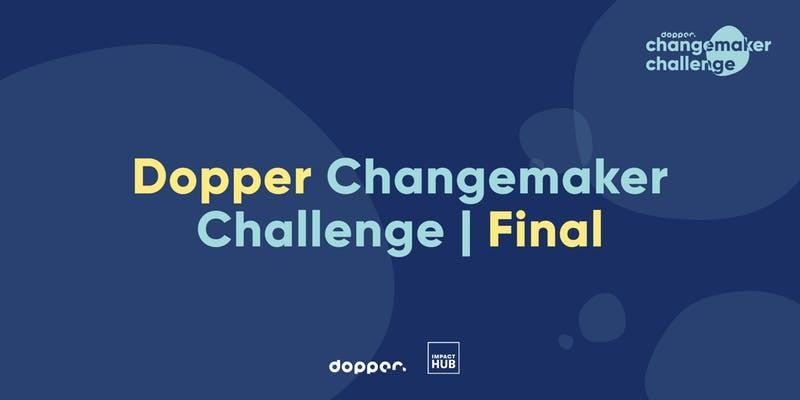 Twenty shortlisted student projects that offer new solutions to reducing plastic waste and cleaning up the world’s water will go head-to-head in a Dragon’s Den style pitch in London, Amsterdam, Berlin and Kathmandu this month, 15-16 June 2019. The winners will receive a research grant of up to €5.000, as well as industry mentoring and support to develop their concepts.

Ideas from the UK’s semi-finalists include: a water bottle made from recycled clothing waste; recycling bins that give users points each time a specific plastic item is placed inside them; a database to make companies accountable for their commitment to reducing waste; and a community app to promote the ‘one person’s trash is another’s treasure’ principle of redistributing unwanted goods.

The Changemaker Challenge – seeking out the best ideas around the globe from the next generation of environmental waste warriors – is the brainchild of Dutch social enterprise Dopper. The not-for-profit business raises awareness about single-use plastic waste by selling its cradle-to-cradle water bottles (in 2014, the Dopper Original was the world’s first water bottle to receive cradle-to-cradle certification), ploughing profits into increasing access to safe drinking water worldwide through the Dopper Foundation.

Dopper founder Merijn Everaarts, who will act as one of the five UK Challenge judges, has championed education and the next generation of creatives since founding Dopper a decade ago. His inaugural design competition for a sustainable drinking water bottle – the Dopper Original – was won by Delft University alumnus Rinke van Remortel, who went on to found his own successful sustainable design practice.
Dopper launched the Changemaker Challenge in the Netherlands in 2017 and is now widening the net to run simultaneous competitions in Amsterdam, Berlin, London and Kathmandu, the latter being the area of focus for Dopper’s charitable activity. Anyone studying in one of the Challenge’s selected countries can submit their graduation project for the award, as long as their topic highlights clean water and / or plastic waste. The winners will be announced at simultaneous live events on Sunday, 16 June and press are warmly invited to attend.

Last year Dopper extended the challenge to schoolchildren, working with 15,000 primary school students to promote the best ideas from these young blue-sky thinkers. The plan is to work with schoolchildren in a further six countries in 2020, as Everaarts says: “We want to let the next generation know that we need them, that they have to believe in their dreams and that they can make a real difference.”

Tweets by @EducatorMagUK
Children not getting enough sleep, risking poor diets and obesity, BNF survey... Rolls-Royce and Discovery Education Launch Pioneering Partnership to Bring STEM...
This website uses cookies to improve your experience. We'll assume you're ok with this, but you can opt-out if you wish.Accept Read More
Privacy & Cookies Policy