Since 17 October 2021, it was recorded that 73,665 young people were referred to the Kickstart Scheme, and 41,570 were recorded as having started on the programme.

With the Kickstart Scheme having ended in March 2022 and with the fairly large numbers of young people partaking in it, we wanted to explore the data‌.

Small Business Prices have therefore revealed key insights into the scheme such as the regions that filled the most kickstart roles, the job sectors that had the highest percentages of kickstart roles on offer, and the least and most common ages for young people to take part in the scheme.

What was the Kickstart Scheme?

On the 8th of July 2020, Rishi Sunak announced the £2 billion ‘Kickstart Scheme’, which aimed to create more jobs for young people aged between 16 and 24 years old. Anyone who was in this age bracket, claiming Universal Credit and at risk of long-term unemployment, could apply.

The government covered all the Kickstarter’s wages for up to 25 hours of work at the minimum wage for their age bracket at the time;

It is important to note that if employers wished to, they also had the option to top up this payment for their Kickstart employee/s.

The UK government also covered National Insurance contributions and employers’ minimum enrolment contributions. £1,500 was available to businesses for each Kickstarter they employed, to cover expenses such as support, training, and set-up costs (gov.uk). 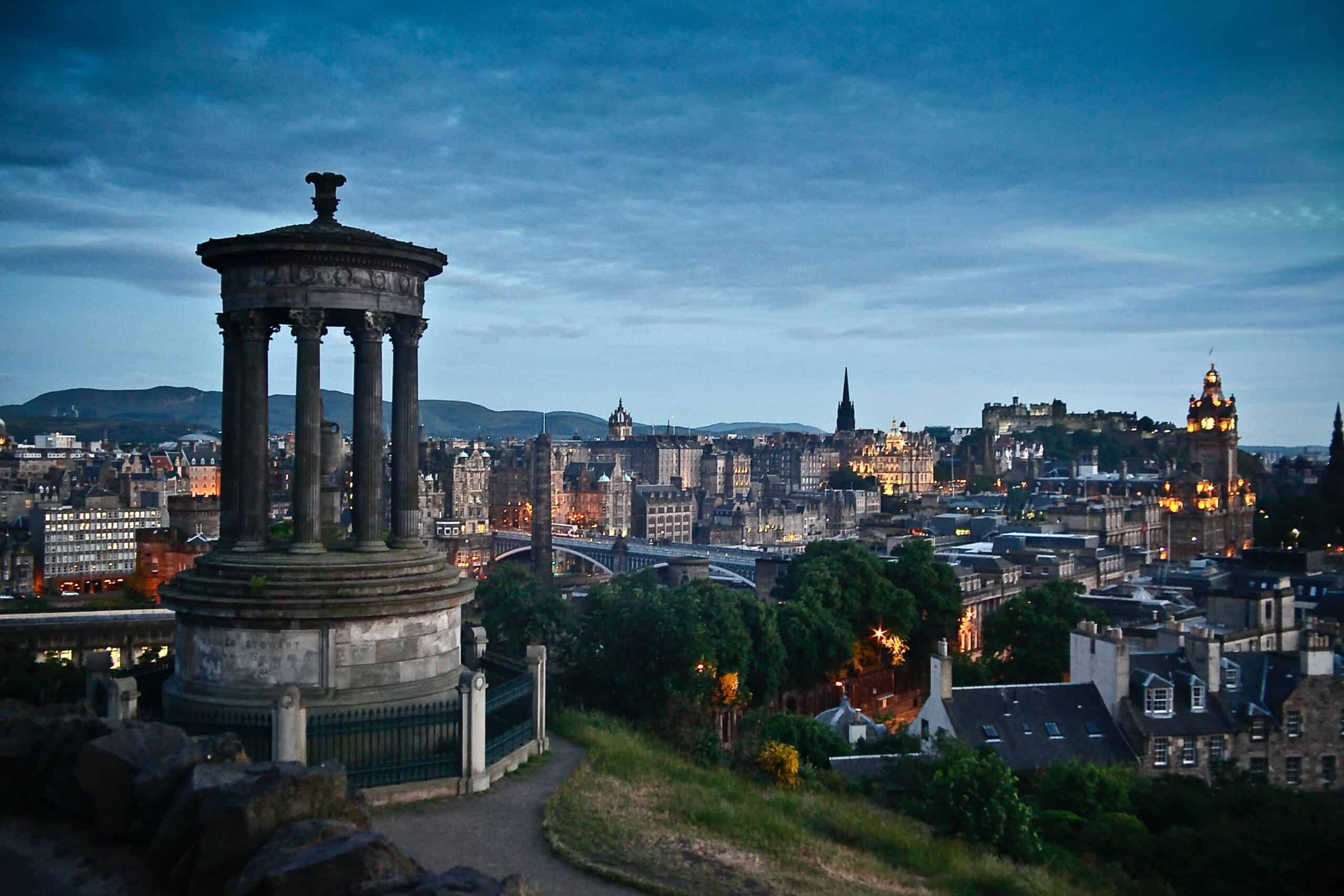 We have investigated the total percentage of available kickstart job roles filled for each UK region by the end of the scheme. 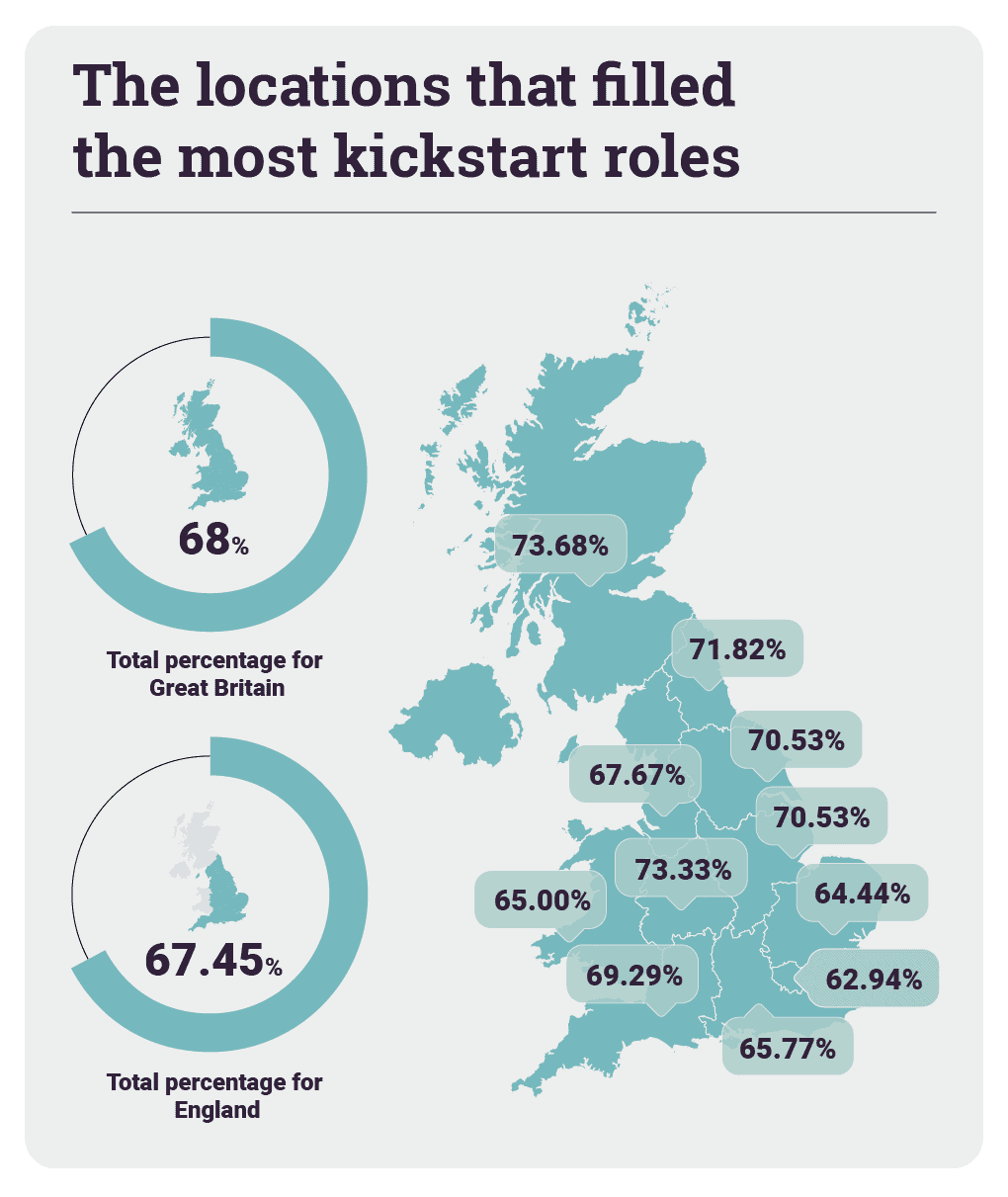 Within the regional data, Scotland saw the highest number of jobs filled at 73.68%, followed by the West Midlands at 73.33%, then finally the East Midlands at 72.86%.

In the last two months of the Kickstarter scheme, the North East had the most roles filled, with 17.27% of their total allocated roles allocated in that time frame.

Animal Care was the Sector with the Most Kickstart Jobs 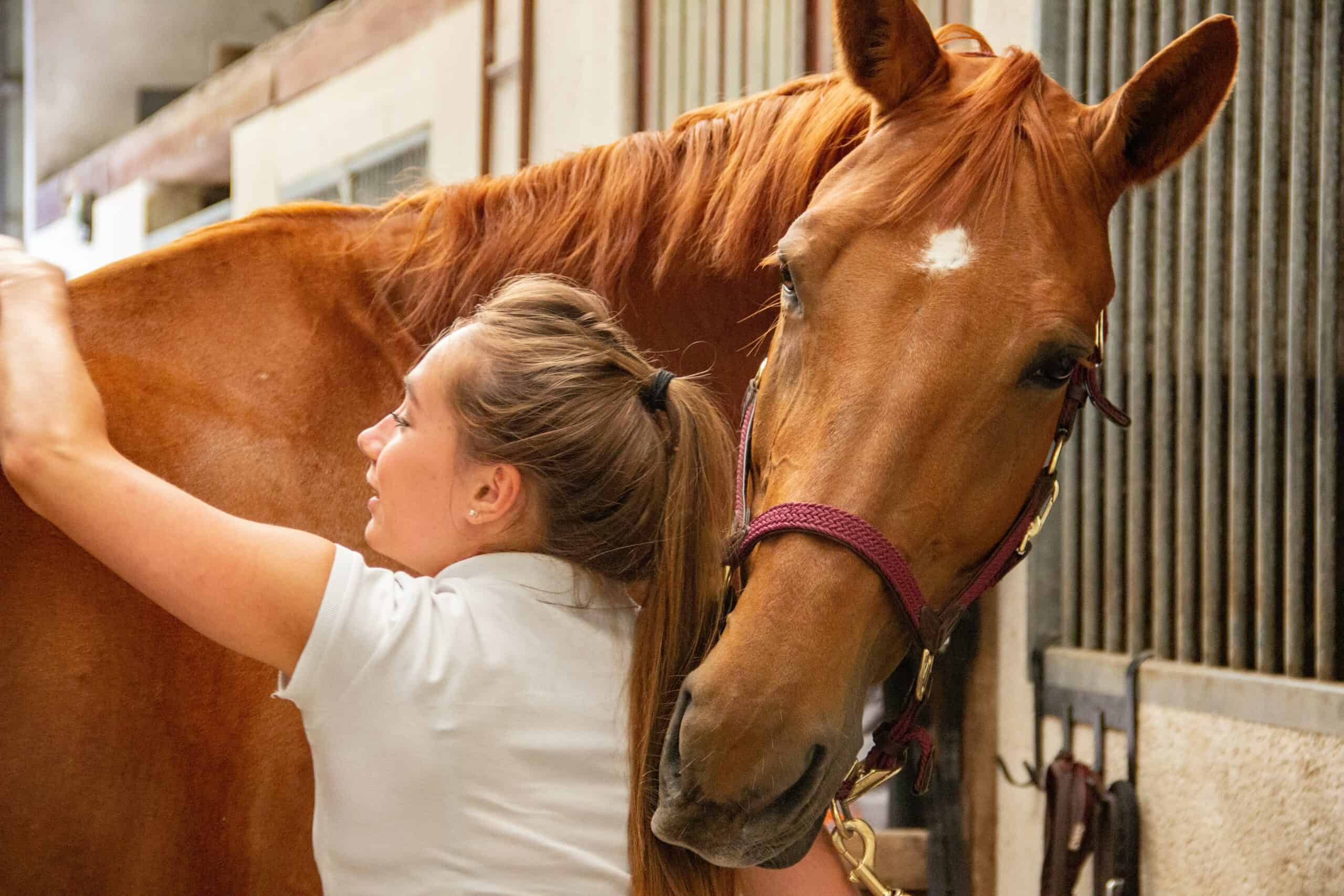 We also looked into which were the most and least popular job sectors in terms of the percentage of ‌kickstart jobs filled. 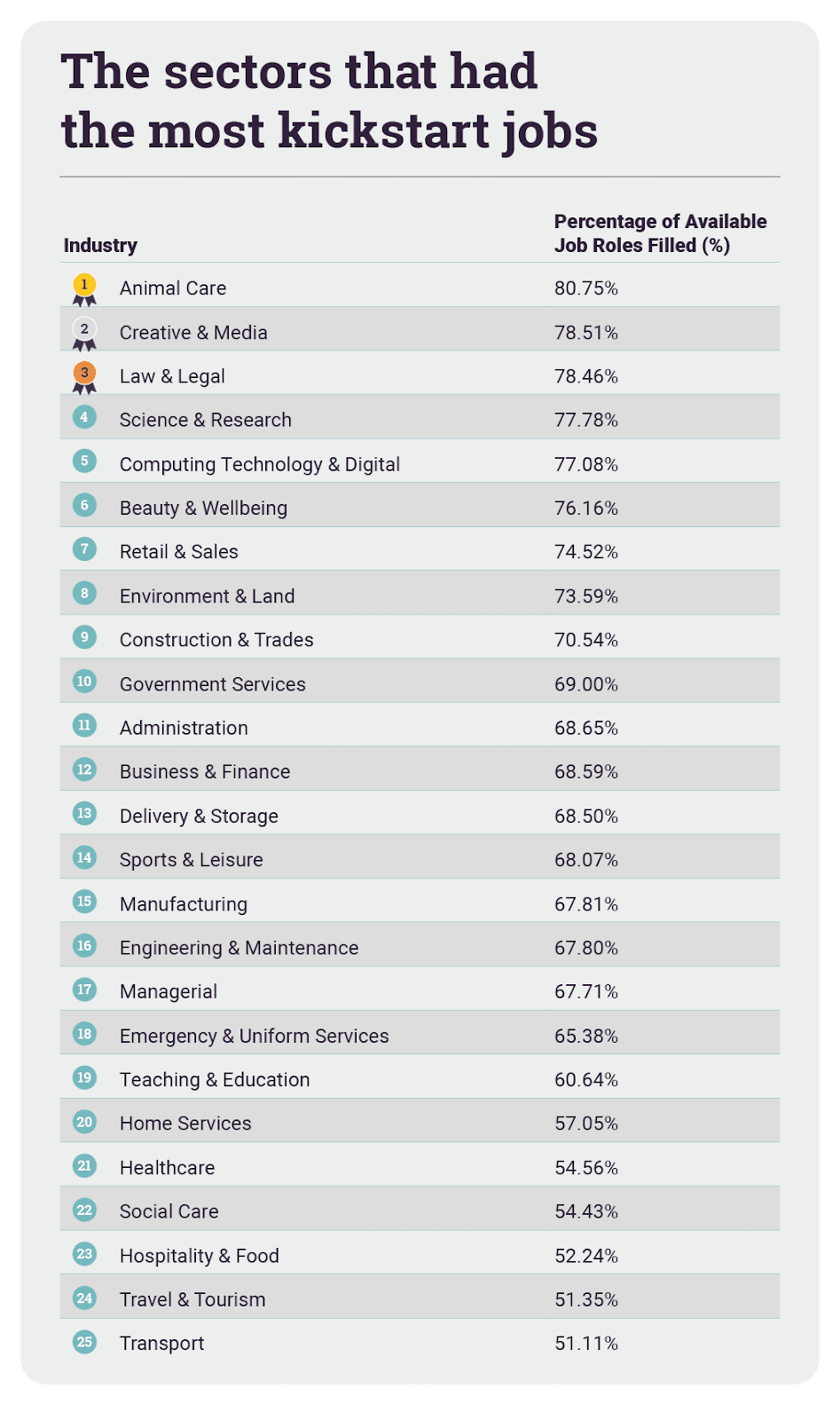 The Animal Care sector filled the highest percentage of ‌jobs, at 80.75%. This was followed by Creative and Media at 78.51% and finally Law and Legal at 78.46%. However, the Transport sector filled the least roles at just 51.11%.

The sector allocated the most jobs was Administration at 57,350, which was followed by the Retail and Sales sector at 34,970 jobs. The Emergency and Uniform services sector were assigned the least number of jobs, at just 520 and had only 0.22% of the total jobs made available on the scheme. 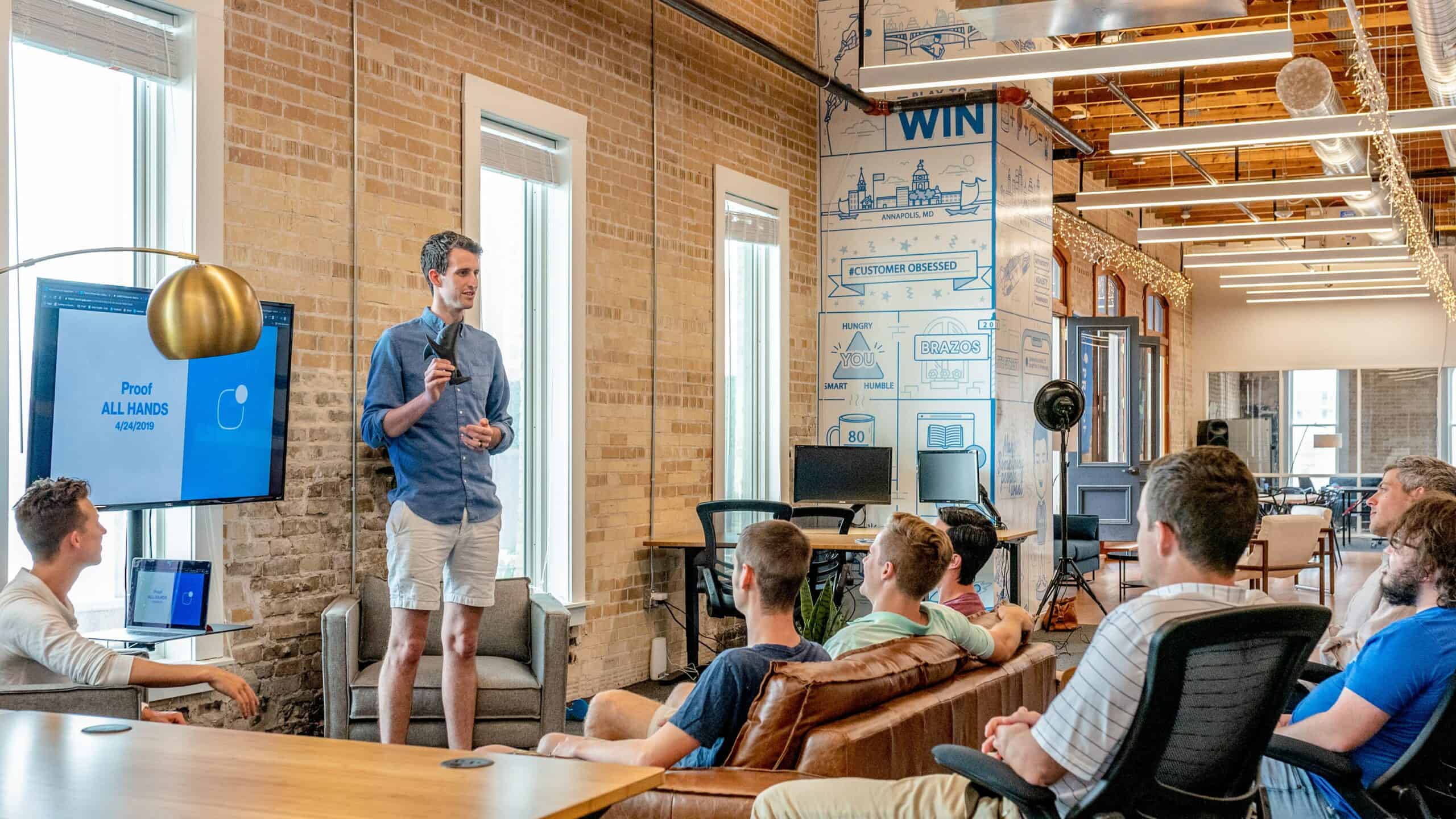 Finally, we investigated the most popular ages for taking part in the Kickstart Scheme. The data was provided by MPs from May 2021 from a sample of the first 20,000 applicants to take part in the scheme.

The most common ages to start the Kickstart placement were 22 and 23, both at 19%. Conversely, the least common ages were those aged under 18 and 25 at less than 1%, which is understandable, as the scheme was originally designed for those aged between 18 and 24.

According to the Big Issue, one-third of the 235,000 kickstart roles advertised were left unfilled when it ended, which could call into question the success of the scheme. Although the scheme originally aimed to provide jobs for many more young people than it actually did, the data shows ‌it was a great success in regions like Scotland, the West Midlands and the East Midlands.

Interestingly, of all the regions we looked at, Scotland filled the most available Kickstart jobs. Of all the sectors analysed, there were the most jobs in Administration and Retail and Sales. Furthermore, the Animal Care sector filled the highest percentage of ‌jobs.

Finally, our data revealed that the most common ages to take part in the scheme were 22 and 23. On the other hand, the least common ages were those aged under 18 and 25, which is to be expected as these ages were outside the kickstart scheme age range.

Sector and regional data were taken from TheyWorkForYou and the UK parliament on the 31st of January 2022 and then updated on the 31st of March 2022 following the Kickstarter scheme ending.

We looked at the percentages of jobs taken amongst regions and sectors at the end of the scheme.

Age data was also provided by MPs, but the latest available data is from May 2021 and was instead taken from a sample of the 20,000 applicants rather than looking at the whole number.