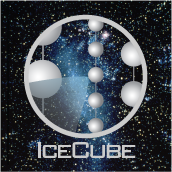 5 April 2017: Students from Tapton School in Sheffield are now working with the University of Wisconsin and the IceCube Neutrino Observatory in Antarctica as part of the “IcePix” project, run by the Institute for Research in Schools (IRIS). Using real data, relayed back to the school from particle cameras, the students will be able to measure the presence of background radiation in the polar region, which will then be added to a dataset of readings from around the world (and beyond) for comparison studies.

Over Christmas 2016, two Jalbotron MX-10 particle cameras were sent on their journey to Antarctica and have now arrived at the IceCube facility. The cameras use the “TimePix” chip developed by the Medipix Collaboration at CERN, the European Organization for Nuclear Research, to measure the level of radiation in the atmosphere.

IRIS has facilitated a number of similar projects in schools, including a partnership with NASA where students were able to take readings of radiation from TimePix cameras on the International Space Station during Tim Peake’s mission in 2015-16 (a project that was aptly named, TimPix). Hearing about this work, Professor James Madsen from the University of Wisconsin got in touch with the institute to offer his support to the IcePix project in Antarctica.

The plan for the IcePix project is for the cameras to be active for the rest of 2017. Students at Tapton School have been leading the project, and have been working on the data capture practicalities so that the cameras can be positioned effectively for the information to be measured. Data can then be compared across the various sources to help derive a bigger picture of the background radiation levels on and above the planet.

Steve Greenwood, director of operations at IRIS said: “We’re so excited to see the data that’s returned from the IceCube facility. This is a great opportunity for students to get hands on with real-life research in science. We are indebted to Professor Madsen for his support, as well as the Science and Technology Facilities Council, CERN and the Institute of Experimental and Applied Physics, who have helped to facilitate this project”.

James O’Neill, a teacher at Tapton School said: “The Institute for Research in Schools has brought real research data into our school and is inspiring the next generation of scientists. We can now go one step further and use the expertise we have developed in school by not just using big data but generating our very own. We just cannot wait to see what we can discover.”

For more information on how your school can get involved with the IRIS projects, visit: http://www.researchinschools.org