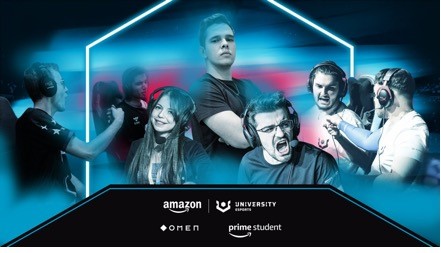 The competition returns after an exciting winter split which featured over 1,000 university teams from more than 100 UK universities, alongside dozens of community gaming events and many students getting their first work experience in the industry.

Amazon UNIVERSITY Esports is present in more than 20 countries on 4 continents, and has a strong educational component, offering university students both training opportunities and their first professional experiences within the sector.

New to the Spring Split

A new addition for this academic year is the University Leaderboard, a ranking system where every team and player can contribute to their university’s points total by taking part and winning games. After the Winter split, the University of Warwick is currently comfortably in the lead, but with the leaderboard continuing into Spring it still remains all to play for.

The new split also brings a new game, for the first time, Apex Legends has been added as a regular season tournament.

All of the tournaments start afresh for the Spring season, with teams playing regularly over eight weeks and competing to feature in the Grand Finals in March and April.

Players of League of Legends, VALORANT, Rocket League, Teamfight Tactics, and Clash Royale will have the opportunity to compete to represent Great Britain at Amazon UNIVERSITY Esports Masters, the on-site competition that brings together the best teams from 16 countries, who will seek to be crowned European champions at university level.

“Our core goals are to increase participation, create a positive and supportive environment for students, and help develop the grassroots of UK and Ireland esports. After a successful Winter split, I am delighted to begin a new phase of Amazon UNIVERSITY Esports in the UK and Ireland. This term we plan to step it up: with the launch of the brand-new University Tour on campuses around the UK, continued development of the university leaderboard, more support for student society events, more opportunities for students to get involved and (details soon to be revealed) an even bigger live finals event.”

Amazon UNIVERSITY Esports’ mission is to bring awareness of the many employment opportunities emerging from the esports industry to students and contribute to their education. The first split of the competition included educational workshops and guest lectures with tools and training in some of these areas, which will continue in the second split. Workshop topics so far have included subjects such as marketing, branding, and community management, and will be built on in the Spring season with workshops and talks continuing these themes as well as discussing broadcast and events.

In addition to education and training, Amazon UNIVERSITY Esports will continue to offer dozens of paid roles for early-career esports broadcasters and league operations staff – helping support the pipeline of future esports professionals.

From virtual to on-site

In an environment that is mainly virtual, one of the objectives of Amazon UNIVERSITY Esports is to get closer to the student community through face-to-face events. That is why it is developing the UNIVERSITY Tour, a tour of multiple universities across the country, which aims to raise awareness of the competition, and provide students with a variety of experiences linked to the environment of esports and gaming.

UNIVERSITY Tour is set to launch in the UK in Spring, visiting eight universities around the UK, to be announced soon.

Amazon UNIVERSITY Esports is made possible thanks to the support of top-level publishers such as Riot Games, HP Omen, and Prime Student.

Registration for the second split competitions are now open, and more information can be found on the Amazon UNIVERSITY Esports’ website.

UK Student Behaviour Report, commissioned by Chegg’s Center for Digital Learning and produced in partnership with Hanover Research, with input into the survey from Universities UK, delves into the state of student mental health.

Nearly three-quarters (71%) of UK university students say they tend to feel anxious about their classes and coursework, whilst more than two-thirds (67%) feel embarrassed when lost in class, and fewer than half (48%) feel comfortable asking questions.

These were some of the findings of the new UK Student Behaviour Report, commissioned by Chegg’s Center for Digital Learning produced in partnership with Hanover Research. The study, developed with input from Universities UK, polled 621 UK undergraduate and graduate students between July and August 2022, months after UK universities had reopened their campuses post-lockdown.[1] Earlier this year, the Chegg.org Global Student Survey revealed that nearly one-third (28%) of UK students felt their mental health had worsened since starting on or returning to campus after post-lockdown restrictions.[2]

The report also reveals that their academic stress is heightened by time constraints. Over a third of students (37%) do not have enough time to study for all their classes. Many say they are dealing with either inconvenient class schedules (31%), fast-paced courses (31%), a heavy workload (31%), or unclear guidelines (29%).

Candace Sue, Executive Director of Chegg’s Center for Digital Learning, said, “Students are under so much pressure, between their studies, work, and family responsibilities. They are juggling it all as they face a perfect storm front of different challenges – from learning in the aftermath of the pandemic, rising debt levels[3], and now a global economic downturn”. Sue added, “Thank you to Universities UK for their valuable input in developing this study. Through this research, we hope to make a meaningful contribution to the conversation around how all players in higher education can best support their students. After all, mental health can have a huge impact on academic performance, and we are deeply committed to both learner and educator success.”

The research shows that students’ mental health challenges extend far beyond the classroom. More than half (54%) of students struggle with practicing healthy habits like working out and healthy eating. They also have difficulty sleeping; almost two-thirds (64%) say they don’t get enough sleep. And despite living in the most connected era in history, students appear to suffer from loneliness. Nearly half (44%) say they have trouble meeting new people and making friends.

Students’ stress is compounded by the rising cost of living. Well over one-third (39%) say textbooks are too expensive. Last month, book publishers warned that prices were likely to increase by up to 20%[4] due to soaring energy and raw materials prices. Students are also struggling with rent and housing costs, with around one-third saying they cannot afford them. Figures from student housing charity Unipol and the National Union for Students found that average annual rents for student accommodation in the UK had risen by 61% since the 2011-12 academic year.[5] Adding to students’ money challenges are difficulty finding a work-study job, an issue that 53% say they face.

The survey also shows that universities have an important role to play in helping students navigate their mental health challenges. The vast majority (77%) of UK students say that mental health services are an important institutionally-provided resource. However, just under half (48%) say their university provides access to these services. These findings come as the UK higher education sector faces pressures of its own. The Russell Group, which represents 24 of the UK’s leading universities, has reported a funding shortfall of around £1,750 per student per year.[6]