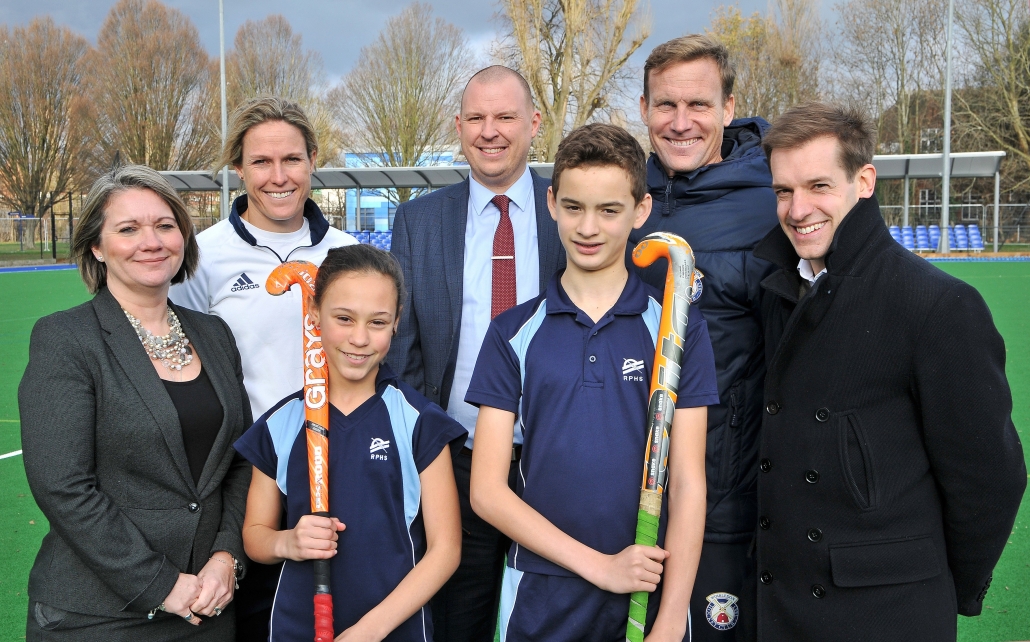 Raynes Park High School in partnership with the Wimbledon Club has opened its new £500,000 AstroTurf hockey pitch. The new pitch is not only being used for school matches, but also elite hockey games. The Wimbledon Club funded the new pitch and is paying for its ongoing maintenance.
Kirsten Heard, Headteacher, Raynes Park High School, says: “We are pleased to have partnered with the Wimbledon Club on this fantastic project. Students are already using the pitch and the Wimbledon Club has held its first training session there. The AstroTurf hockey pitch is such a fantastic asset for the school and presents opportunities for students to improve their game and learn about the sport from the Wimbledon Club. As a BECSLink Community school, this initiative underlines our strategy to forge partnerships with the local community. It puts us on the map as a community school and garners interest in hockey.”
Paul Knowles, Head of Junior Hockey, the Wimbledon Club, says “We’re over the moon that the AstroTurf pitch is now open and our members have already been enjoying the new facility. Our partnership with Raynes Park High School secures the club’s long-term future use of a world class pitch. With 20 international players and 10 Olympians, this is a much-needed facility for our elite players as well as our wider membership. The extended hours of use all year round provides the base for expanding our junior programme and enables us to inspire more local children to take part in the sport.”
Crista Cullen, MBE, Olympic gold medal field hockey player and a member of the Wimbledon Club, says “As part of the women’s Great Britain squad at the Rio Olympics, we agreed that our team’s aim was to inspire the next generation. This impressive new pitch not only provides a much needed world-class surface, but is also a venue to inspire local children to enjoy the sport supported by our team of international players and coaches from Wimbledon.”
Next year the Wimbledon Club will offer coaching to students at the school with the aim of developing their long term love of the sport. The club has already been supporting the school by providing inspirational coaches and players to attend school events and donating new hockey sticks.
The new AstroTurf pitch provides a new venue to expand the Wimbledon Club’s schools outreach programme. The pitch is predominantly being used for hockey, although it can be used for other sports such as football using temporary football marks which can be brushed off.

About Raynes Park High School
Raynes Park High School is a co-educational comprehensive school which educates over 1,000 pupils, aged 11 to 19. It became the first state school to be an accredited Tim Henman Foundation BECSLink Community in March this year. The school is working alongside national and local Merton businesses, education charities, and sports and arts organisations to provide outstanding resources and learning opportunities for young people. This offers students and teachers not only from the school, but also other local schools the opportunity to develop new skills and interests.
www.raynespark.merton.sch.uk

About The Wimbledon Club
The Wimbledon Club, founded in 1883, is one of the world’s oldest hockey clubs. It is a section of the multi-sport Wimbledon Club. Wimbledon is one of the largest and most successful hockey clubs in the country with both the men’s and women’s teams fielding multiple current Great Britain internationals. The club has also recently started working more widely in the community with a schools outreach project, which to-date has bought hockey to 2,000 local Merton state school children.
http://www.thewimbledonclub.co.uk/hockey

Tweets by @EducatorMagUK
ZUNTOLD PUBLISHING LAUNCHES YA NOVEL SHEDDING LIGHT ON MALE EATING DISORDER... Ensuring that disadvantage is not a barrier to success
This website uses cookies to improve your experience. We'll assume you're ok with this, but you can opt-out if you wish.Accept Read More
Privacy & Cookies Policy