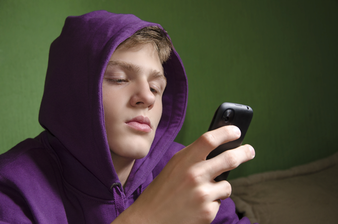 View claims of multi-tasking prowess with suspicion – evidence suggests efficient multitasking isn’t possible. World famous neuroscientist and attention expert Earl Miller says that our brains are “not wired to multitask well… When people think they’re multitasking, they’re actually just switching from one task to another very rapidly. And every time they do, there’s a cognitive cost in doing so.”
Key driver is dopamine, the brain hormone associated with pleasure. The brain produces it in anticipation of a reward which is usually a learned behaviour thus addictive. For example, we see a favourite food and know that pleasure will come from eating it so dopamine is released. We get the dopamine pleasure hit before tasting and then the actual pleasure from eating it, like a Pavlov dog salivating on hearing the bell before feeding.

The area of the brain which manages behaviour (ie which task to to do next) is the prefrontal cortex. This has a novelty bias, so is constantly looking something new. No surprises that it makes us respond to a new email or text above more mundane issues. Our brain learns that there’s pleasure in responding to a new email or text, so dopamine is produced when we hear our mobile phone bleep to say a new one has arrived. The dopamine makes us feel good as we anticipate looking at the new message (and feel bad if we don’t). So while we may claim that we’re efficiently multi-tasking, the reality is we’re creating a dopamine-addiction feedback loop.

So if if it’s hard for adults to break the multi-tasking addiction, think of the dopamine hungry adolescents – what chance have they of doing some focussed revision?  So confess up that we’re all a bit susceptible to the lure of a little dopamine, and look at steps we can take to minimise distractions

For revision a key action is being very disciplined about where they put the mobile phone during study and how long is realistic to keep away from it without causing anxiety. Yes, people get anxious when separated from their mobile and there’s even a name for it – nomophobia. So maybe accept they’ll check it every 30 or 40 minutes and gear revision targets in those chunks of 40 minutes. The a fifteen minute break catching up with new messages is fine.

Generally most small chunks of revision, ie learning, self-testing, re-learning what was missed, can be fitted around 40 minutes. It’s extremely hard to focus effectively for much longer without a break. The key to success is ensuring children do enough of those 40 minute sessions to effectively learn the material – we can help kids revise, but we can’t teach them wisdom or hindsight.

Tweets by @EducatorMagUK
The surplus model of school improvement – By David Didau Games to Help your Child’s memory – Words by Dunc Llew
This website uses cookies to improve your experience. We'll assume you're ok with this, but you can opt-out if you wish.Accept Read More
Privacy & Cookies Policy