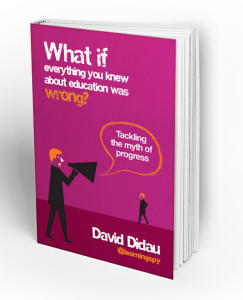 A zero-sum game is one in which there is a winner and a loser; if you haven’t won, you’ve lost. The term derives from game theory and economics and describes a situation in which one person’s gain utility (the ability to satisfy his or wants) is exactly balanced by another’s loss of utility.

In The Uses of Pessimism, Scruton points out that much wrong-heading thinking and behaviour derives from what he calls the ‘zero-sum fallacy’ where all gains are paid for by the losers.

Society therefore is a zero-sum game, in which costs and benefits balance out, and in which the winners’ winnings cause the losers’ losses. (p.81)

This kind of dichotomous thinking was the basis for Marx’s theories of economics, but is a bit unfashionable now. Most economists would agree that it’s a little bit more complicated than that. Most transactions are mutually beneficial to some degree; although one participant might do better than the other, profit making is not necessarily rapacious. Scruton argues this is a potent cognitive trap whereby idealistic, utopian thinkers fail to acknowledge reality; it’s not there their schemes are unworkable, it’s that they’ve been thwarted by an enemy. He then goes on to argue that the move to replace grammar schools with comprehensive schools was because of a belief in this zero-sum fallacy:

But clearly a procedure that enables some pupils to succeed must cause others to fail: so the zero-sum fallacy maintains. Such a procedure generates a ‘two-tier’ education system, with the successful enjoying all the opportunities, and the failures left by the wayside to be ‘marked for life’. In other words, the success of some is paid for by the failure of others. And thus was born the movement for comprehensive education, together with the hostility to streaming and the downgrading of examinations, in order to prevent the state education system from producing and reproducing ‘inequalities’. (p.95)

Equality is easy to achieve, Scruton argues, all you have to do is put a lid of achievement and ensure no child gets ahead. This is the kind of silliness that results in a lot of the closing the gap narrative: if the gap between the most advantaged and least advantaged is too wide then a school is failing. This creates a perverse incentive; it’s easier to reduce some students’ performance than it is to increase others’, therefore the most effective way to narrow the gap is to limit the ‘winnings’ of those at the top end to ensure the losses incurred by Pupil Premium students are less severe.

Zero-sum thinking, which sees the educational success of one child as paid for by the failure of another, forces education into a mould that is alien to it. The child who fails at Latin might succeed at music or metalwork; the one who fails to get to university might succeed as an army officer.

And to a degree he’s right – children have a diversity of ability and an education system which fails to acknowledge this diversity in one in which excellence cannot exist. But something seems not quite right with this picture. Here are some of the objections I have:

Obviously the 11+ is a very extreme form of differentiation, but as Scruton says, we’ve become equally hostile to the concept of streaming and setting too is increasingly under attack. I not certain about this by instinct tells me that any attempt to differentiate be ability leads, inexorably, to students being treated differently – how could it not? It then becomes a self-fulfilling prophecy – those that are perceived as less able remain less able.

If we divide children into ‘more able’ and ‘less able’ then it follows that we will treat them differently. Alex Quigley posted this morning about teacher expectations and the pygmalion effect. Our beliefs about pupils have a tremendous impact on their progress and attainment. In 1968, Rosenthal and Jacobson ran a landmark experiment which demonstrated that if teachers were led to expect enhanced performance from children, then their performance was indeed enhanced. Pupils were given a disguised IQ test at the beginning of the study. Teachers were told that some of their students (about 20% of the school chosen at random) would likely be ‘spurters’ that year, doing better than expected in comparison to their classmates. At the end of the study, all pupils were retested and showed statistically significant gains favouring the experimental group.

Making these kinds of distinctions and them acting on them really does seem a zero-sum game and one subject to the Matthew Effect – the more able get more able, the less able get, comparatively, less able because they just don’t access to same resources, opportunities and support. They’re treated differently.My favourite way of thinking about differentiation is that everyone should struggle no matter their ability. This doesn’t mean everyone should be treated the same, but it does suggest we shouldn’t make school easy for anyone.

This is not to say that any form of differentiation is bad – expert teachers should be encouraged to act of their professional instincts and treat their students as they think befits their personalities. Challenge students to do things they’re not currently able to do and then, perhaps, differentiate by support. But differentiation by ability is, I think, pernicious.

I’ve written before about both my concerns with differentiation and also some of the critique of the growth mindset trope – these to me seem almost like competing, opposing forces in education – on the one hand, children should be treated differently depending on their ability and on the other, everyone can improve if they have the right set of beliefs. I’m not sure of the truth of these statements, but I do know that no one rises to low expectations.

Make sure to visit www.thelearningspy.co.uk for more superb guidance from David Didau.