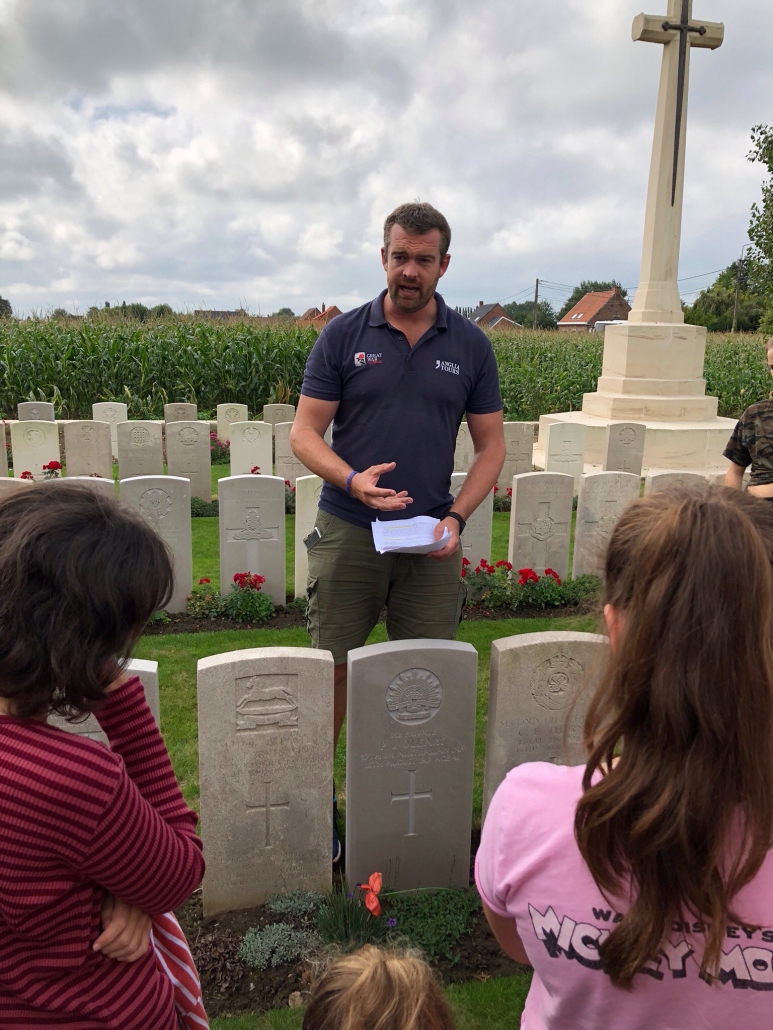 As a member of the English Department’s Talented Writers’ Group, senior pupil, Sofia in Year 9 at Manor House, candidly shares some of her thoughts about the Year 9 Battlefields Trip. This is a moving account of one girl’s experience.
Belgium. A small, scenic country with enchanted woods, peaceful green fields, and delicious chocolate. Those fields weren’t always peaceful – in fact, they used to be battlefields. It’s just so hard to believe that such a dear little land to the north of France could have seen the unprecedented bloodshed that was the First World War. You certainly can’t imagine it looking around today. The woods have dents from artillery fire and chillingly real trench replicas running through them. One particularly beautiful piece of architecture is the Menin Gate, dedicated to the missing soldiers, where a remembrance ceremony is held to the famous Last Post (at which I personally laid a poppy wreath from Manor House).
I was awoken at six o’clock, moved from car to coach to train to France to Belgium, and found myself standing before some gravestones – row upon row, acres filled with the white headstones. This was also because this was a Commonwealth cemetery, owned by all the Allied forces: Britain, France, Canada, Australia, India. There were also Chinese names from the Chinese Labour Corps though and even a couple rows of German names.
What hit me hardest was how many of them said nothing but ‘A soldier of the Great War. Known unto God’. This was a real live human being with thoughts, emotions, hopes, and dreams just as complex and valid as my own, and all we can say about them is how they died.
We visited several of these Commonwealth cemeteries.
We also went to a German graveyard which was very different. Instead of neat headstones there were simple black crosses or stone tablets for Jews adorned not with engravings, but moss and cobwebs. Instead of honouring individuals there were as many as four to a cross. Our guide, Andy, explained this as a drastically different mindset. The mild disrepair was a return to nature and the mass burials kept loyal comrades close together in death. Apart from a few red and white roses there wasn’t much to show that anyone really cared for these people and how brave they were.
While Britain took a punch to the gut from a level of grief they’d never felt before, Germany had a more stoic approach. They were a military country. They were used to fighting and losing many lives. They’d been involved a relatively short time ago, in the Thirty Year War. Thirty years of death, fear, poverty, and horrendous conditions will desensitize anyone. I thought of this little graveyard as proof they really did care and that made it seem a little less cold.
But what about the battles that left us with so many dead young men to bury? What about the devastation itself?
We saw two massive mine craters, both in France. First came the Hawthorn Ridge mine sitting like a wound within what was once a copse of trees on a hill where you could’ve sat, watched the view, had a picnic on a summer’s day. This one was set by us to kill the Germans.
Certainly those poor men up there were completely vaporized by such an explosion. The soldiers far below would’ve felt the blast; the Earth shuddering in horror.
Then there was the Lochnagar Crater. It was much more decorated with a cross and a platform for poppy wreaths. A pilot named Cecil Lewis was flying above the area when it was detonated and was thrown off course so badly he was lucky he lived to tell the tale.
What can I say about the Battle of the Somme? The soldiers there walked exactly like lambs to the slaughter. Yes, walked. They were told to walk rather than run into the raging German fire. Why? Because the British army didn’t have a clue that day. And good Lord, were we forced to learn. The Somme was a massacre – the pre-atomic bomb massacre. No description I can give you will allow you to comprehend it. I don’t even fully comprehend it myself. A horrendous proportion of gravestones (60,000 dead on the first day) bear its date.
Another equally distressing place in Somme is the Thiepval Memorial. The Thiepval Memorial is bigger inside than it looked. This contains a mere fraction of names of the missing or unsuitable for burial; you could feel the atmosphere plunge. Faced with names crammed into every possible square inch of stone, my thoughts echoed those of the soldiers they belonged to approaching enemy lines: there are too many of them. There are way too many of them. But while their bodies were blasted to ribbons, only my heart received that fate now. Actually, my heart was still in the metaphorical trenches. It went out to be pulverized when I saw the cemetery behind the memorial. The graves took me by surprise. You couldn’t see them from the whole area in front. I, much like the floundering British army, was not prepared. I had been a little misty-eyed at past stops (such as the Caribou memorial) but this really got the tears flowing. It could be the bottom of the ocean for weight and scale.
So, those are some of my thoughts about the Year Nine battlefields trip.
I hope I made you think.
Sofia, Year 9.
________________________________________

Tweets by @EducatorMagUK
Primary schools invited to create an extraordinary school play with National... Education recruiter responds to Labour’s proposals for National Substitute...
This website uses cookies to improve your experience. We'll assume you're ok with this, but you can opt-out if you wish.Accept Read More
Privacy & Cookies Policy