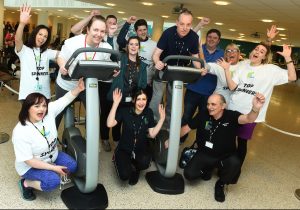 Staff and students from a local TEESSIDE college have gone the extra mile to help raise money for a local charity.

Taking place in the college’s atrium, the group took part in a team relay, as they both cycled 149 miles to the home of the National Powerchair Football League.

After a fierce competition, it was the business support team that came out on top with the event raising over £1000 for charity.

As part of their new training regime, Redcar & Cleveland College exams assistant, Emma Haytack and, deputy CIS manager, Nancy Haigh, took up spinning classes as part of the college’s staff wellbeing package, and realised there was an opportunity to promote fitness to staff and students whilst also raising money for charity in the process.

Emma said: “Some members of staff were looking at ways to keep fit when we decided to take up the new spinning classes at the college, which we have been really enjoying.

“When we were asked about ideas for fundraising for the local area, we came up with the idea of a spin-a-thon as we felt this was a fun idea to get everyone working together, staff and students alike, for a fantastic cause.

“The main focus was raising money for the football club. We hope to help them buy a new powerchair to give more disabled people within the local area the opportunity to take part in sport.”

Emma added: “We had a fantastic day of fun competition with both teams determined to come out on top and we’ve already started to plan more fundraising activities for the rest of the year.”