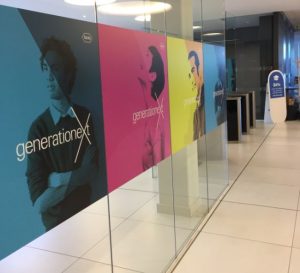 Narcissistic next generation? Not so! New research reveals today’s young people aspire to careers in cutting-edge science over fame or fortune…but more needed to nurture talent

Friday 18th November 2016, Welwyn Garden City: Today’s young would rather find a cure for cancer (34 per cent) than gain celebrity status through film (9 per cent), reality TV (3 per cent) or social media (8 per cent), according to research announced today at an annual GenerationeXt science fair, opened by Professor Alice Roberts, anatomist, anthropologist and broadcaster, in collaboration with leading medical biotech, Roche.

The research of 2,500 UK 16-24 year olds found today’s ‘Selfie Generation’ are, in fact, the ‘Selfless and Sensitive Generation’ – with nearly two thirds (62 per cent) taking part in altruistic activities (volunteering, caring for others or donating to charity), six in 10 (57 per cent) aspiring to find a job that contributes positively to society and 85 per cent actively preparing for their career from an early age.

However, the research also revealed the pressures and anxieties felt by our young; a massive 80 per cent of 17-year-olds worry about finding a job in the future – with 67 per cent worrying about too much competition and 31 per cent worrying about the impact of the current economic and political climate on their prospects. What’s more, discrepancies in interest in and uptake of Science, Technology, Engineering and Mathematics (STEM)-related subjects reinforce the need to take action to combat the UK’s STEM deficit.

Encouragingly, science was rated the most interesting subject area (32 per cent) and science, medicine and medical discovery were ranked in the top five careers that contribute the most to society (alongside teaching, emergency services and allied health professions), however disappointingly, 57 per cent of respondents had never been encouraged to take higher studies or pursue a career in the field of science or medicine.

Speaking at the GenerationeXt science fair, Professor Alice Roberts said:  “Careers in science and technology are so varied, so creative and offer so much potential to really make a difference to people’s lives. It’s a great shame if young people are turned off by misconceptions about what is really a gloriously diverse range of different subjects and disciplines, by negative stereotypes, and by ideas that science “isn’t for them”. That’s why initiatives like GenerationeXt are so important – we need to blow some myths out of the water!”

Reasons for not pursuing a career in science or medicine included feeling that it’s too complicated (31 per cent), not feeling clever enough (22 per cent), not choosing the right core subjects early on (22 per cent) and being told by others that it doesn’t suit their skill set (26 per cent).

Richard Erwin, General Manager, Roche, UK said: “With heightened post-Brexit anxieties and the shortage of skills in the life sciences sector, it is even more critical that we support the next generation of home-grown talent to ensure that British science remains world class – the future of UK healthcare innovation depends on it. We’re excited that young people are passionate about science, share our goal to cure cancer and make a meaningful difference to society. The industry has a duty to address the gap in STEM (Science, Technology, Engineering, Maths) uptake, including the misconception that you need to have a particular set of skills to pursue a career in this industry.”

The GenerationeXt science fair includes inspirational talks and hands-on interactive sessions from Professor Roberts and leading researchers Professor Eleanor Stride (Professor of Engineering Science; Fellow at St Catherine’s College, Oxford) and Professor Peter Lovatt (University of Hertfordshire). It aims to engage and excite the next generation of talent to embark on a career in the Life Science sector. More information, together with a wealth of resources for young people, teachers and parents will be available on the GenerationeXt hub: www.generationext.roche.co.uk after the event.

Handy Fasteners win £25000 award for innovation which helps arthritis suff... TeacherIn app set to transform the recruitment landscape for schools and supply...
Scroll to top
This website uses cookies to improve your experience. We'll assume you're ok with this, but you can opt-out if you wish.Accept Read More
Privacy & Cookies Policy
Necessary Always Enabled