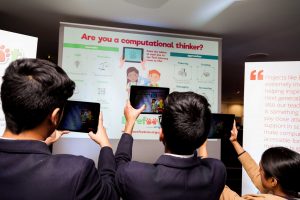 GB primary school teachers feel strongly that tech literacy will underpin their pupils’ futures, according to a new study from BT and Ipsos MORI. 78% think it’s as important as reading and writing, and 92% say tech skills will be needed for all careers from now on. 97% believe it’s their role to prepare kids for a digital future – but only 25% strongly agree that they’re equipped to do so. That’s a major challenge for the next generation, as young people grow up into a world shaped by technology.

The research has also found that 41% of teachers are not yet confident with the principles that underpin tech literacy. These include problem-solving, logic, sequencing, and perseverance – the core abilities young people need to make the digital world work to their advantage.

Writing in the foreword to the report Minister of State for Digital and Culture, Matt Hancock, said: “Digital skills are as important as numeracy and literacy in the modern world and we must ensure that our children are given the opportunity to develop the understanding they will need as they grow up. We have an opportunity, indeed an obligation, to make sure that tech literacy begins at an early age. So I’m delighted that BT has continued to focus on the importance of tech in primary schools and I welcome this report.”

BT CEO Gavin Patterson added: “Given the ubiquity of tech in our lives and work, it’s vital that teachers can give their pupils a strong grounding in key computational thinking concepts – because that’s what will allow young people to fulfil their future potential. That’s why BT has made a long-term commitment to building a culture of tech literacy, starting with the next generation.”

BT leads on the Barefoot Computing Project, which was developed by the British Computing Society, the Department for Education, Raspberry Pi and BT. It gives primary school teachers free classroom resources and training workshops on using the key concepts that underpin tech literacy. Barefoot has already reached more than 28,000 teachers, and through them over 830,000 primary school children. The study found that teachers who have been through the Barefoot project are more confident than their peers: 84% said they understood computational thinking, compared to a baseline of 57% among their peers.

BT Director of Tech Literacy Liz Williams, said: “We’ve focused our first efforts to build a culture of tech literacy on primary schools because that’s where children begin to form a lasting picture of how they see the world, and their aspirations for when they grow up. We believe that getting a grip on technology should be fundamental in the early years, as important for young minds as reading and writing. That’s why it’s our ambition to make tech literacy a new cornerstone of modern education in primary schools.”

Sony Professional Solutions Europe to showcase its latest education solutions... Explore Learning named Private Tuition Centre Operator of the year for third...
Scroll to top
This website uses cookies to improve your experience. We'll assume you're ok with this, but you can opt-out if you wish.Accept Read More
Privacy & Cookies Policy
Necessary Always Enabled